To grow, spiders must shed their hard-exterior exoskeleton through a process known as molting. Molting allows the spider to grow and replace its exoskeleton with a fresher model. Young spiders molt frequently, while older spiders molt less frequently. Araneomorphs molt only until they reach sexual maturity, while mature mygalomorphs molt annually for their entire lives. 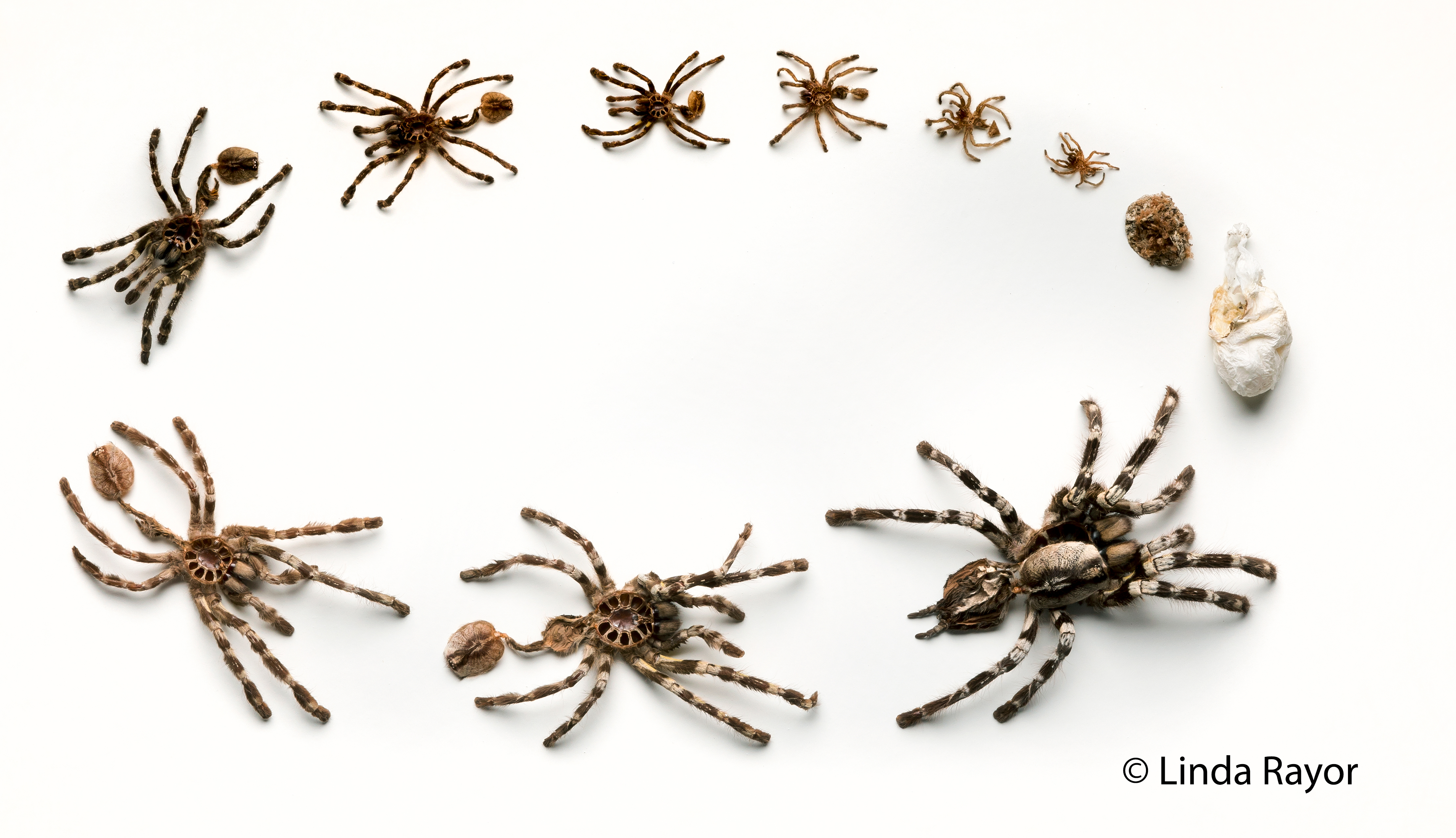 Spiders lay their eggs in a silk enclosed sac. Egg sacs typically use several kinds of silks to help camouflage, waterproof, and cushion the eggs. Spiders can lay as few as twenty eggs per sac, to many hundreds of eggs. Each egg is a developing spiderling, feeding on maternal yolk for nourishment.

While some species deposit egg sacs and desert them, maternal defense of eggs and newly emerged young is actually common. When spiders emerge from the sacs they resemble small adults. Unlike many insects, no spiders undergo metamorphosis. Most spiderlings will soon disperse to live independent solitary lives.

Before the molt, spiders try to protect themselves in burrows or retreats. They get cranky and stop eating. Araneomorphs will typically hang from a silk thread to molt, while mygalomorphs build silk mats to lay on their backs. Prior to the molt, the spider’s outer epidermis separates from the underlying, wrinkly ‘new’ exoskeleton.

During the molt, over 2/3 of the hemolymph/ blood in the abdomen shifts into the cephalothorax causing the carapace (back of the cephalothorax) to pop off. Then the spider needs to wiggle its chelicerae, palps, and eight legs out of the exuuvia (exoskeleton). Once freed from the exuuvia, the spider will pump its legs to create pressure to push the new exoskeleton to its full size.

Molting is an incredibly risky period, as spiders are vulnerable to predators. In addition, if there isn’t enough humidity the exoskeleton or exuuvia can get stuck part way off. The exoskeleton remains pliable for only a short period, perhaps 1-hour, and then begins to harden. If the exuuvia gets stuck, the spiders’ appendages will dry in the deformed shape that they are forced into. Spiders that get stuck in their molt either die or must lose limbs to save their lives.

With each molt a spider can replace limbs that were lost during the last instar or the shape of the abdomen or appendages can change. Regenerated limbs may take several instars to be completely replaced and normal. Spiders with legs of different sizes than the other sides are common and indicate the previous loss of limbs. Regenerating lost appendages is a big advantage that arachnids have over humans.

Araneomorphs only live for 1 to 3 years. Often females live longer than males. This is particularly so if the females cannibalize the males after or during mating!

Male mygalomorphs stop molting after sexual maturity, but females may live as long as 25-years. One mygalomorph being studied in Australia recently died at 43 years old!