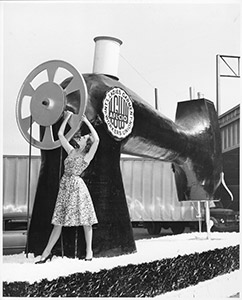 This exhibit focuses on the role played by two major American clothing workers’ unions, the International Ladies’ Garment Workers’ Union (ILGWU) and the Amalgamated Clothing Workers of America (ACWA) in defending the standards of living and the job security of their members through the use of the union label and the promotion of the fashion industry in collaboration with prominent American designers. Sewn into every union-made garment, the label signaled to consumers that the goods they were buying were produced by American workers who enjoyed “fair labor standards and the American way of life.”

Today’s successor unions to these historical labor organizations are UNITE-HERE and Workers United.

The exhibit features a selection of union-made garments, photographs, banners, film, and objects documenting union label campaigns throughout the century-old history of these two unions. It specifically focuses on the massive campaigns launched in the 1970s and 1980s to promote union-made clothing and the fashion industry, in response to the rise of cheap imports, which threatened the jobs and livelihood of American workers. Some of the biggest names in the U.S. fashion industry helped make union made fashionable and recognizable. Stephen Burrows, Halston, and Pauline Trigère are among the many designers who manufactured their garments in ILGWU shops, creating the beautiful pieces featured in this exhibit.

This online exhibit is based on the physical exhibit curated by Denise Nicole Green and Patrizia Sione, which was on display August 31 - November 6, 2017 at the College of Human Ecology and the Kheel Center, Cornell University. The online exhibit website was created by Rachel Getman.

The Cornell Costume and Textile Collection at costume@cornell.edu

The Kheel Center at kheel_center@cornell.edu

Designing and Manufacturing with the ILGWU

Look for the Union Label