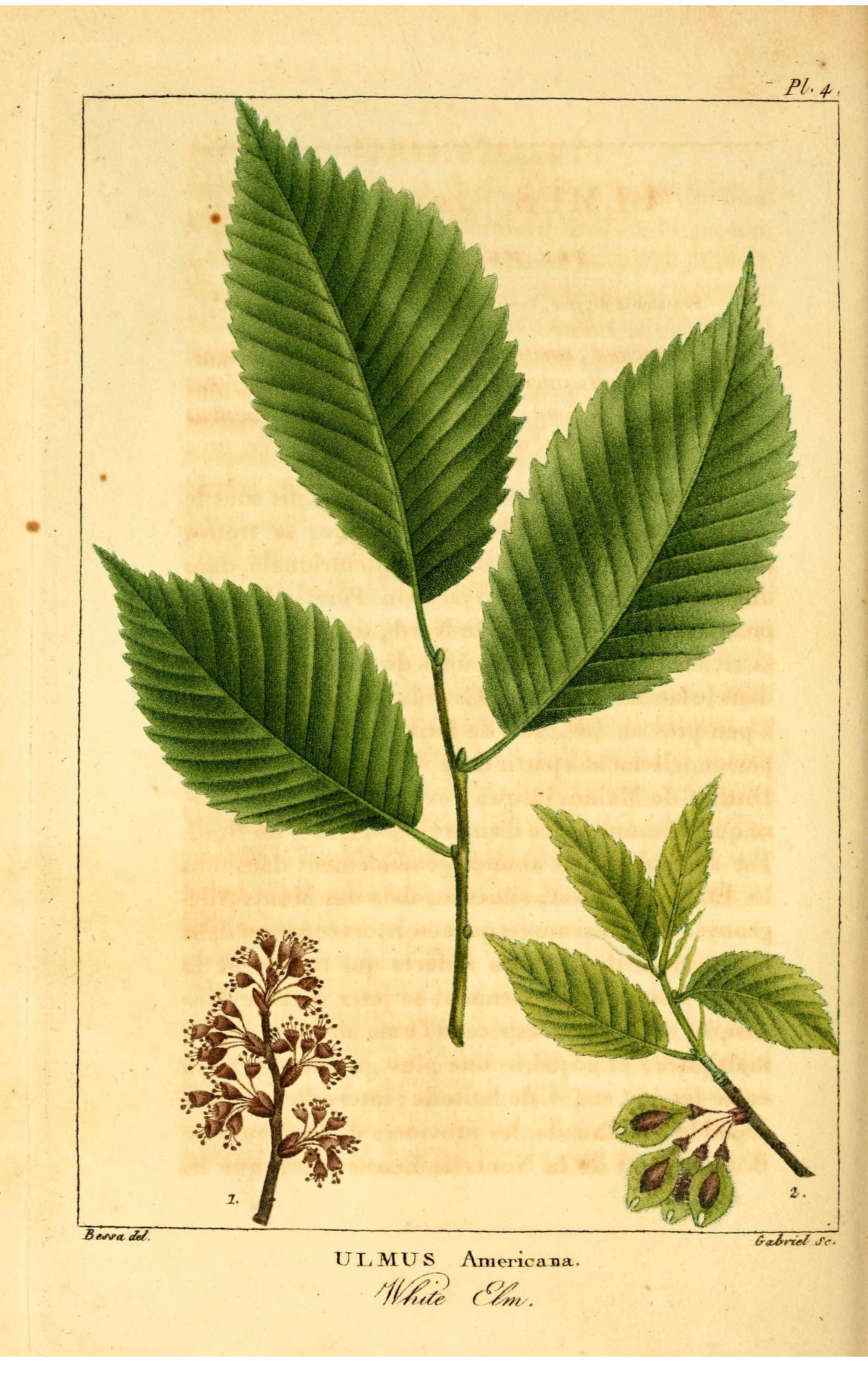 The American elm is a fast growing tree that can be found throughout eastern North America, on plains and hills up to 2000 feet in elevation, as well as on wet flats and bottomland.

Bearing small green flowers in the spring, for the summer its limbs sprout oval-shaped, notched, and asymmetrical leaves that turn a yellow in the fall.

Adaptable to both wet and dry sites, an American elm can reach towering heights of 100 to 200 feet, and has been known to reach 100 to 200 years of age, with some over 300-year-old trees recorded.

The American elm’s longevity and stately form as well as its tolerance of urban conditions once made it a favorite street, park and lawn tree in many areas of the United States. By the mid-20th century a fungal infection known as Dutch elm disease (DED) weakened or killed elms across the country, leading to replacement on a massive scale.

Hybrid elms more resistant to DED have been developed and are once again being planted, but unfortunately they are not immune to disease. The current concern with elms is a disease called elm yellows, also known as phloem necrosis, which is caused by a phytoplasma. Phytoplasmas are bacteria-like organisms that have no cell wall. Symptoms of elm yellow are most common in mid- to late-summer and include yellowing and drooping of foliage followed by leaf drop and death of branches. While there is no known cure, elm yellows does not move into new areas as quickly as Dutch elm disease can. A rapid removal of any infected trees is advised to prevent spread.

Map of American Elms on the Cornell Campus

The American elm’s long-lived grandeur and its tolerance of urban conditions once made it a favorite street, park and lawn tree, including on Cornell’s campus. In the early 1870s Cornell received generous gifts of American elm trees that were planted along East Avenue and the original Arts Quad. Then, when the erection of the College of Agriculture’s first buildings established the Ag Quad in the early 1900s, another collection of American elm trees, these already quite large, was brought in via horse and “transplant wagon” for planting on Cornell’s upper campus. But in the 1970’s, the catastrophic Dutch Elm disease, a fungal infection first introduced to the United States in the early 20th century, arrived on campus. Quickly weakened by this scourge, the stately elms of Cornell’s Ag and Arts Quads were ultimately done in by the onslaught of yet another blight, phloem necrosis or elm yellows.

By the 1980s, American elms had almost disappeared entirely from campus, and the only survivors today are two trees by Morrison Hall which are cultivars somewhat resistant to fungal disease and one by Jessup Field. While the species’ continued susceptibility to the Dutch elm disease fungus has discouraged its wider presence in cultivated landscapes, thanks to the elm’s prolific seeding habit, seedlings and saplings are still common in the wild.

While the development of hybrid elms more robustly resistant to the Dutch elm disease offers promise for a successful reintroduction of these grand beauties to our campus, the story of the American elm stands as a good cautionary tale as well: Maintaining a diverse tree canopy on the Ag Quad and elsewhere will help mitigate the ravages of any future potential disease or insect attack on any one particular species that graces our campus today.

Note that these monetary values will vary greatly based on where the tree stands; energy usage for indoor spaces will not be reduced by a tree placed far from a building, for example. These numbers refer to the larger of the two American Elms off Tower Road (see map at bottom of page).

Over the next 45 years, based on forecasted tree growth, i-Tree Design projects total benefits worth $764.

$243 of savings by reducing 10,438 lbs. of atmospheric carbon dioxide through CO2 sequestration and decreased energy production needs and emissions

American Elms on the Cornell Campus