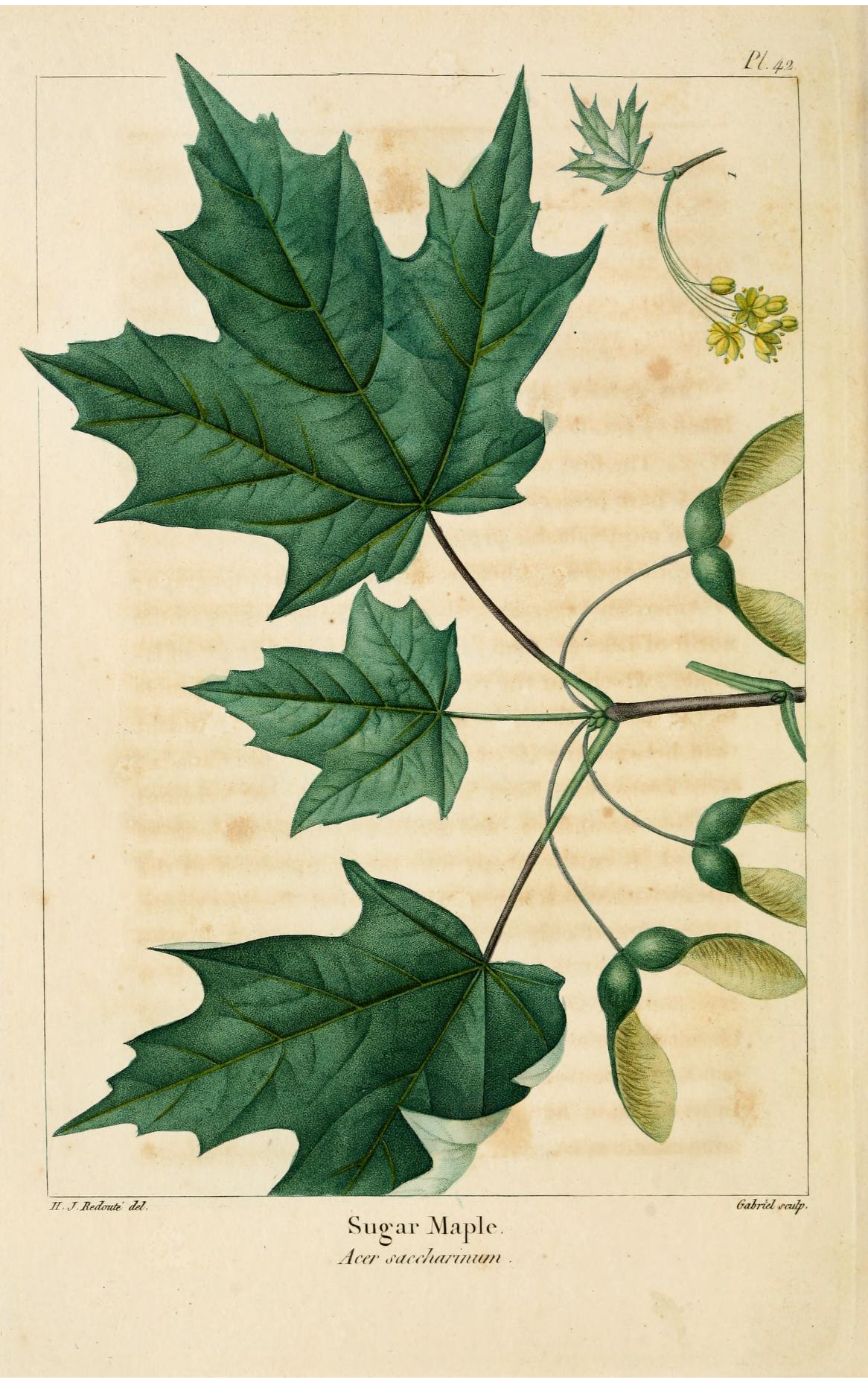 Sugar maples are native to eastern North America, ranging from Canada (Nova Scotia to Manitoba) into northern Georgia & northwestern South Carolina in the American South. Abundant in New York and the states of New England, they can be found as far west as eastern Kansas and northeastern South Dakota.

Sugar maples grow into tall (up to 75 feet), long-lived trees. They are relatively drought-tolerant, and prefer acidic to alkaline, well-drained soils. Their limbs can spread to 50’ wide, and their leaves display famously beautiful yellow, orange and red colors every fall.

Their hard wood has been used for many purposes—furniture, paneling, baseball bats—but they’re most famous for their sweet sap, which can be processed into syrup and sugar. Early English settlers reported the harvest of maple sap by Native Americans, and in his 1663 treatise “Some considerations touching the usefulnesse of experimental naturall philosophy,” English chemist Robert Boyd provided the first description of the process of turning the sap into syrup and sugar:

“...there is in some parts of New England, a kinde of Tree, so like our Wallnut-trees, that there is so called, whose Juice that weeps out of its Incision, etc. if it be permitted slowly to exhale away the superfluous moisture, doth congeal into sweet and saccharine substance.”

As Francoise Michaux estimates in his inventory of North American trees, by the late 1700s maple sugar accounted for 10 million of the 80 million pounds of sugar consumed in the United States each year. In 2016, maple syrup production in the United States totaled 4.2 million gallons, for a total value of $147 million, with New York the second leading producer in the country after Vermont. Given the sugar maple's widespread presence and historical economic importance, it's no surprise that the Empire State has chosen it as our state tree.

Map of Sugar Maples on the Cornell Campus

Every tree provides both function and value, from shade and wildlife habitats to CO2 sequestration and stormwater retention. To help us appreciate some of the benefits of the trees around us, iTree Design has developed a tool to calculate the main financial benefits of a given tree in a specific location over time. Note that these monetary values will vary greatly based on where the tree stands; indoor energy usage will not be reduced by a tree placed far from a building, for example. The specific sugar maple used for this calculation stands here on the Ag Quad on Cornell's Ithaca Campus.

Over the next 25 years, based on forecasted tree growth, i-Tree Design projects total benefits worth $958:

$281 of savings by reducing 12,061 lbs. of atmospheric carbon dioxide through CO2 sequestration and decreased energy production needs and emissions

At Cornell's Arnot forest, sap is collected from Sugar Maples and then filtered and boiled down to produce maple syrup. In this video, Cornell professor Brian Chabot, tells us about the history of maple sugaring and shows how maple syrup is made.

See the full text through The Biodiversity Heritage Library

Sugar Maples on the Cornell Campus