Riding involves sitting and movement simultaneously. In riding, forward movement is not usually created by the human body itself, but by another being (e.g. a horse, donkey, mule, or other animal) or technology (e.g., a horse-drawn carriage, motorized car, or motorcycle). Trains, busses, subways, and the futuristic possibilities of automatic driving vehicles and Hyperloop technologies offer new forms of riding, where the passenger need not worry about driving or controlling the transportation device. Riding can be a shared transit experience, and thus the garments and images featured in this case convey the different kinds of relationships that emerge through riding. The “Personal Space Dress,” by artist Kathleen McDermott, is visible on the video monitor and designed to expand on public transit to protect from man-spreading. Also featured in the case are horse-related items, including saddle blankets and a riding habit.

Description: This size 48 jacket was manufactured in the United States by denim company Lee. The tag reads “Union Made Lee Jelt Denim Sanforized” Owing to design changes made to this style in later decades, this appears to be from in the 1950s. This garment has been highly customized by way of 88 patches. Other than two additional Lee patches that were added, all others represent companies involved with the railroad. It is unlikely that this was ever worn when working. Judging by the excellent condition of the jacket, it was well cared for and more likely was worn by the owner during times of leisure. This item is a part of the transport workers union memorabilia being held by Cornell University’s Kheel Research Center for Labor-Management and Documentation Archives. 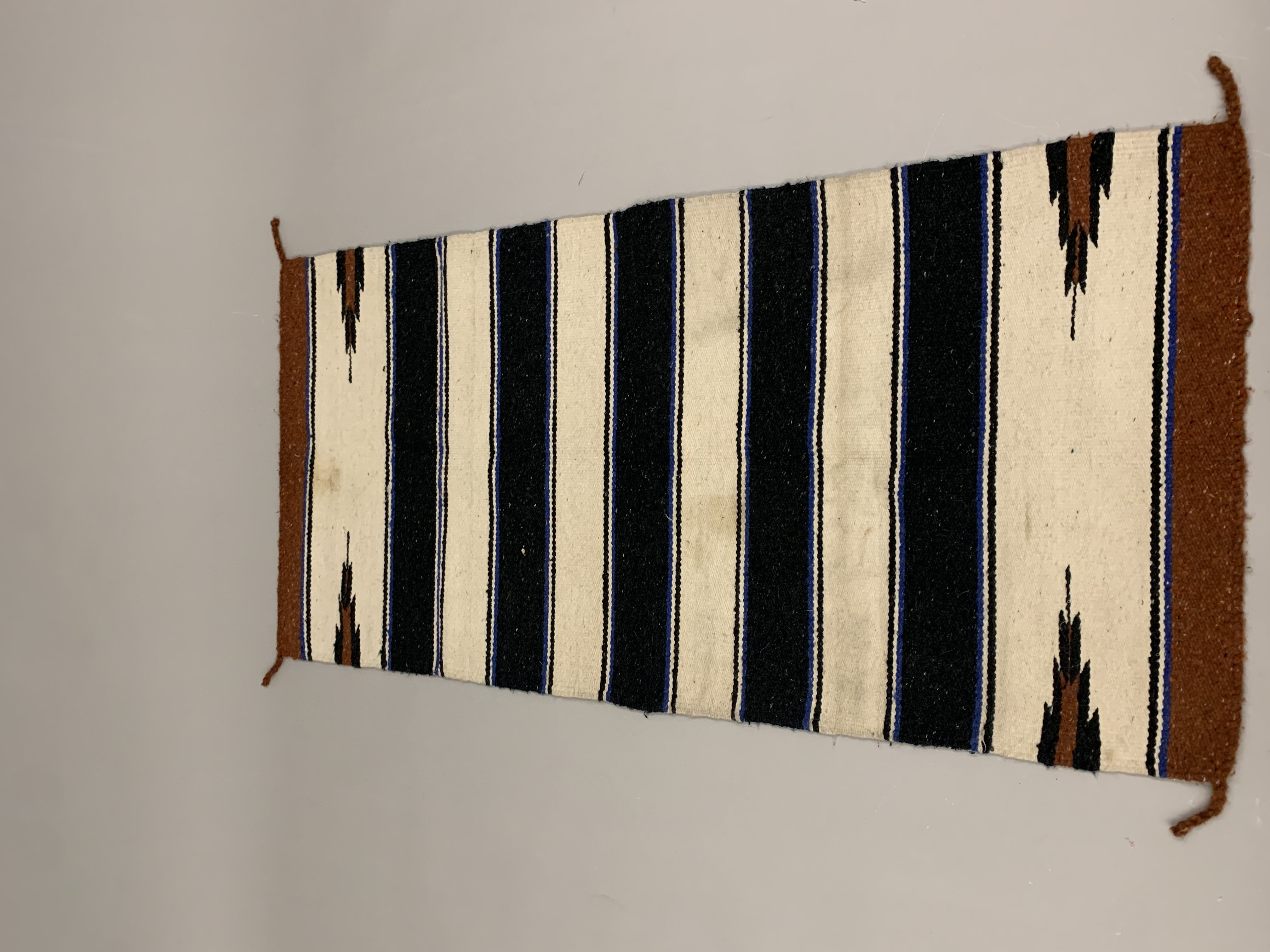 On loan from Frederic Wright Gleach

These saddle blankets were purchased by the head of the Anthropology Collection at Cornell University, Dr. Frederic Wright Gleach. He acquired them from a tack shop in Boseman, Montana in the mid-1980s and they have been in his personal collection ever since. The blankets were made by Zapotec weavers in southern Mexico for both international trade and local use. They have some similarities with Navajo designs, but they are a simplified version. 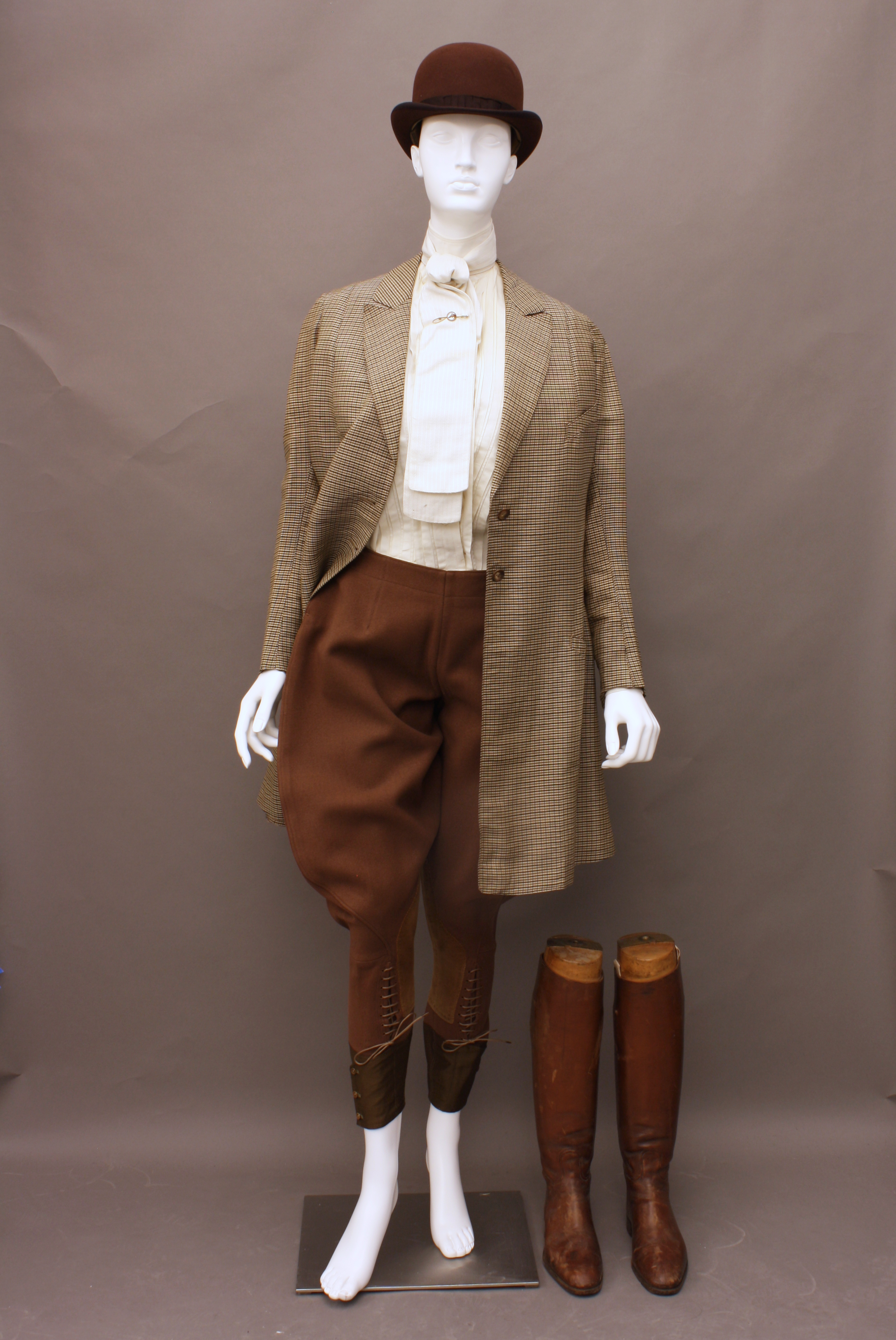 Description: This formal English riding habit was used by Gertrude Heim Remey during the 1920s. It is comprised of a raw silk checkered jacket, tan gabardine breeches, brown derby, knee-high boots, and white cotton blouse complete with stock tie and pin. As Remey was a wealthy socialite, this beautifully intact ensemble is representative of high-end equestrian fashion at the time of its manufacture. This ensemble, as well as the rest of Remey’s wardrobe, was donated to CF+TC by her husband Chares Mason Remey after her death in 1932. An extensive history of this ensemble appears on the Cornell Fashion + Textile Collection’s blog, written by Karen Steffy, Graduate Field Assistant in the Fiber Science and Apparel Design Department at Cornell University.

Description: Artist Kathleen McDermott created this dress as a part of Urban Armor, to address the needs of women who are at risk of harassment in public, specifically while riding the bus, metro, and existing in crowded places. Sensors in the front and back of the dress detect when a presence is too close to the wearer. When the presence is detected, motors are activated to open up and expand the skirt of the dress and create more space around the wearer. The dress closes when the area around it is detected as unoccupied. The Personal Space dress opens an opportunity for women to take control of their environment, and have some fun while using public transportation. 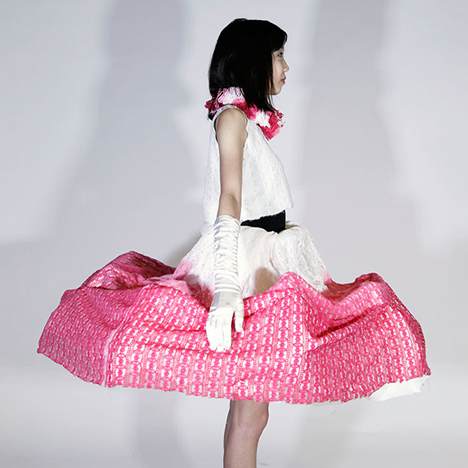 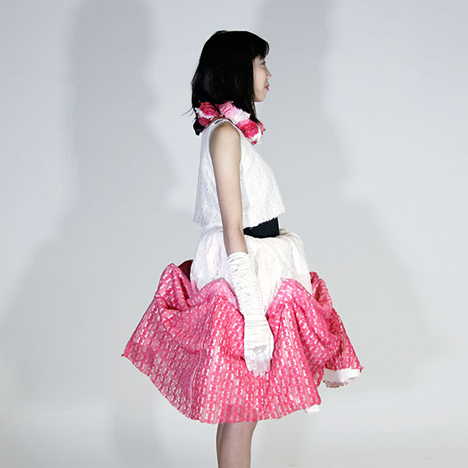 Kheel Center #: 5376pb01f23b Description: This black and white photograph depicts a train engine-cleaning crew of six women. According to a caption affixed to the back of the image, this was taken at Southern Pacific’s roundhouse in Oakland, California. Although undated, there is a high likelihood that it was taken some time during World War II. Railroad labor has historically been a male-dominated occupation, however, as a result of the large number of men who were overseas fighting in the war, it was commonplace for women to be employed in fields where they would not have been welcomed during normal times. Black women were an important part of this workforce. This image is significant in that it contributes to the documentation of a history that frequently goes unacknowledged.

Kheel Center #: 5149 P Bx 1 Description: This black and white photograph depicts a desolate trainyard surrounded by industrial buildings, a bridge, a road, and a tunnel. That of these elements allude to bustle, commerce, and transit, and yet all still add a distinctly haunted feeling to this image. A note indicates that the purpose of this photograph was to document “rail conditions and depressions”, so it may have been the case that this trainyard was not in use due to its being in need of repair.

From top to bottom: Women Engine-cleaning Crew, and Reed Street East Side Trainyard

Description: Women significantly participated in World War l by driving the Motor Corps voluntarily. Motor Corps was used for different purposes, including delivering supplies, transporting nurses and workers to their posts, sick and wounded people to the hospitals. Due to the Motor Corps' important role, only women with extensive training could enroll in the Red Cross. At that time, women’s uniforms became available in all parts of women’s war efforts, including the Red Cross. However, women’s uniform was influenced by men’s uniform. The change from traditional dressing to uniforms was basically a matter of practicality. Adopting uniforms offered women respect, self-confidence, self-worth, validity, suppressing gender distinctions, and importantly the right to vote in 1920. 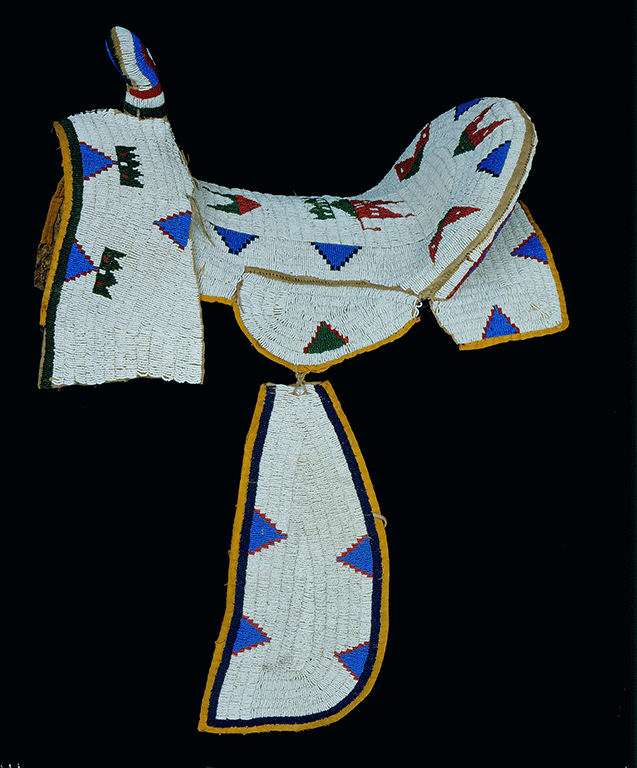 Description: Saddles are a supportive structure fastened to a horse's back by a girth and help keep the moisture off of the horseback and prevent potential problems related to the horse back-body. Till 1850, people used animal hides to make saddle blankets. Later, saddle blankets became available with fantastic decorative techniques. Also, saddle designers are considering the wearer's body protection from accidents or other natural elements.

Description: This long, tan motoring duster with matching covered buttons at center front, exposed satin collar, cuffs, and decorative pleats at the knee, worn while riding early automobiles. Long duster coats and goggles became available in the world of women’s fashion clothing in 1900, mainly to protect women’s body and their clothes while traveling in the very first version of automobiles, which did not have a windscreen, side doors, and roofs. Its emergence is a symbol of non-gender-based activity that caused the rise of female motorists in that era. The design is portraying the balance between masculine technology of motoring and women. 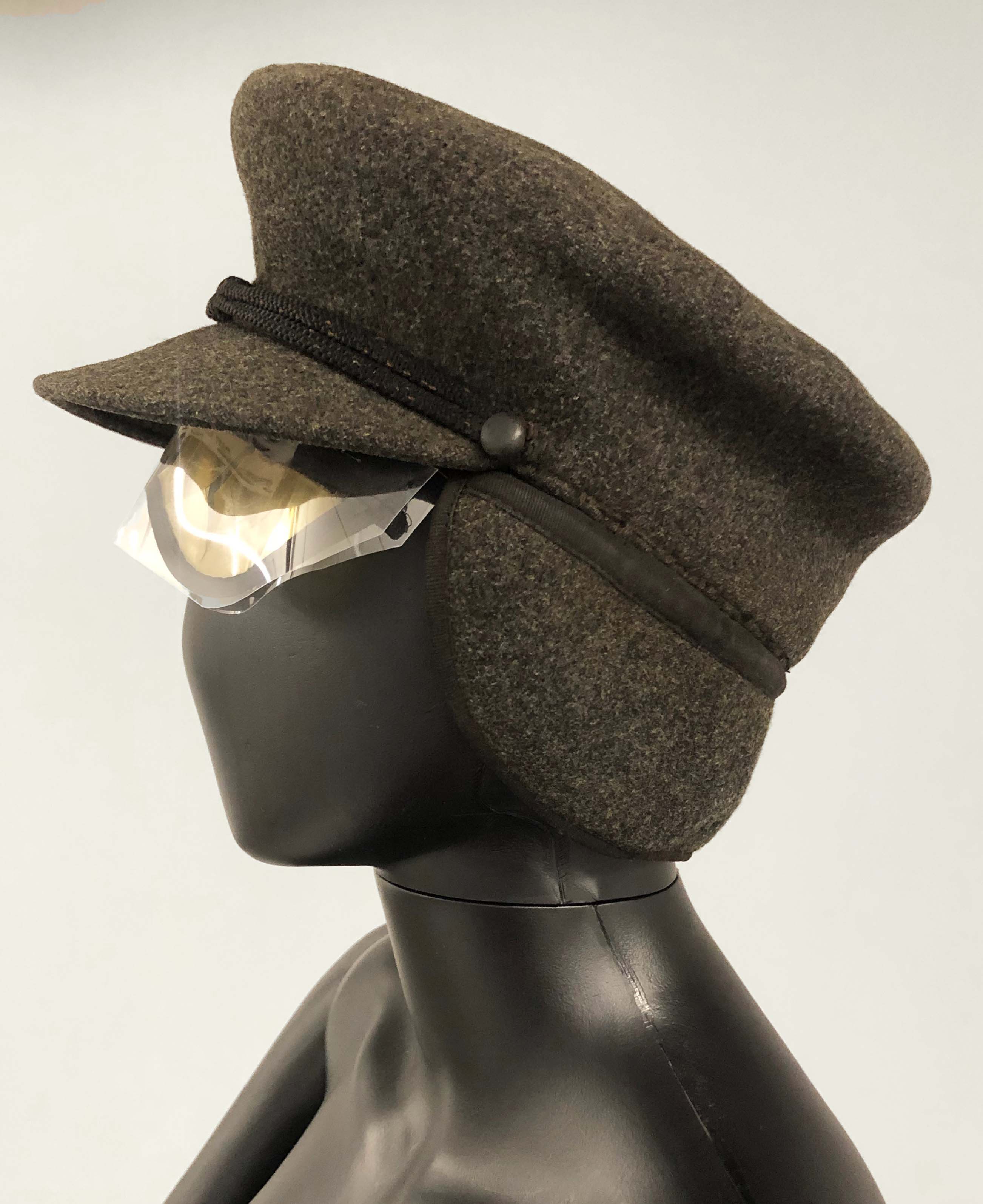 This olive-green wool auto cap is dated to be from the early 1900s. The cap's side and back extend low enough to cover both the neck and the ears when being worn. Inside, there is the visible remnant of a manufacturing label; however, it can no longer be read due to degradation and fading. This piece is unique in that it has a built-in pair of goggles. The goggles, a flexible yellow plastic, are sewn around the hat’s bill's interior edge. The wearer of this cap was the father of Cornell alumni and former professor Dr. Mary Shaw Ryan. Dr. Ryan’s father, who resided in Willsboro, PA, was one of the town’s first residents to own an automobile and would wear this while driving.