From jumping to sustained flight, humans have a longstanding fascination with being airborne. Arial ships emerged in the 18th century, with demonstrations as early as 1709 and the first manned hot air balloon flight in 1783. Airship technologies developed with the discovery of hydrogen gas, and early (pre-1930s) long-distance flight took place on rigid dirigible balloons like the Zeppelin (named for inventor Ferdinand von Zeppelin, and depicted on the backside of the Art Deco style pajama top in the case). Glider technologies enabled the Wright Brothers to successfully take flight in 1903 under sustained and controlled conditions. By the mid-20th century, airplanes supplanted the rigid airships in commercial travel as well as military, delivery, and other flight services. How much technology is needed to enable flying? The wingsuit, parachute, and skydiving accessories, for example, allow the human body to gracefully and somewhat controllably move through the air. In this case, we feature garments that enable flight, from a Pan Am flight attendant uniform to a contemporary wingsuit and lastly, a WWII aviation jumpsuit complete with textile evasion maps in the event of a water landing. 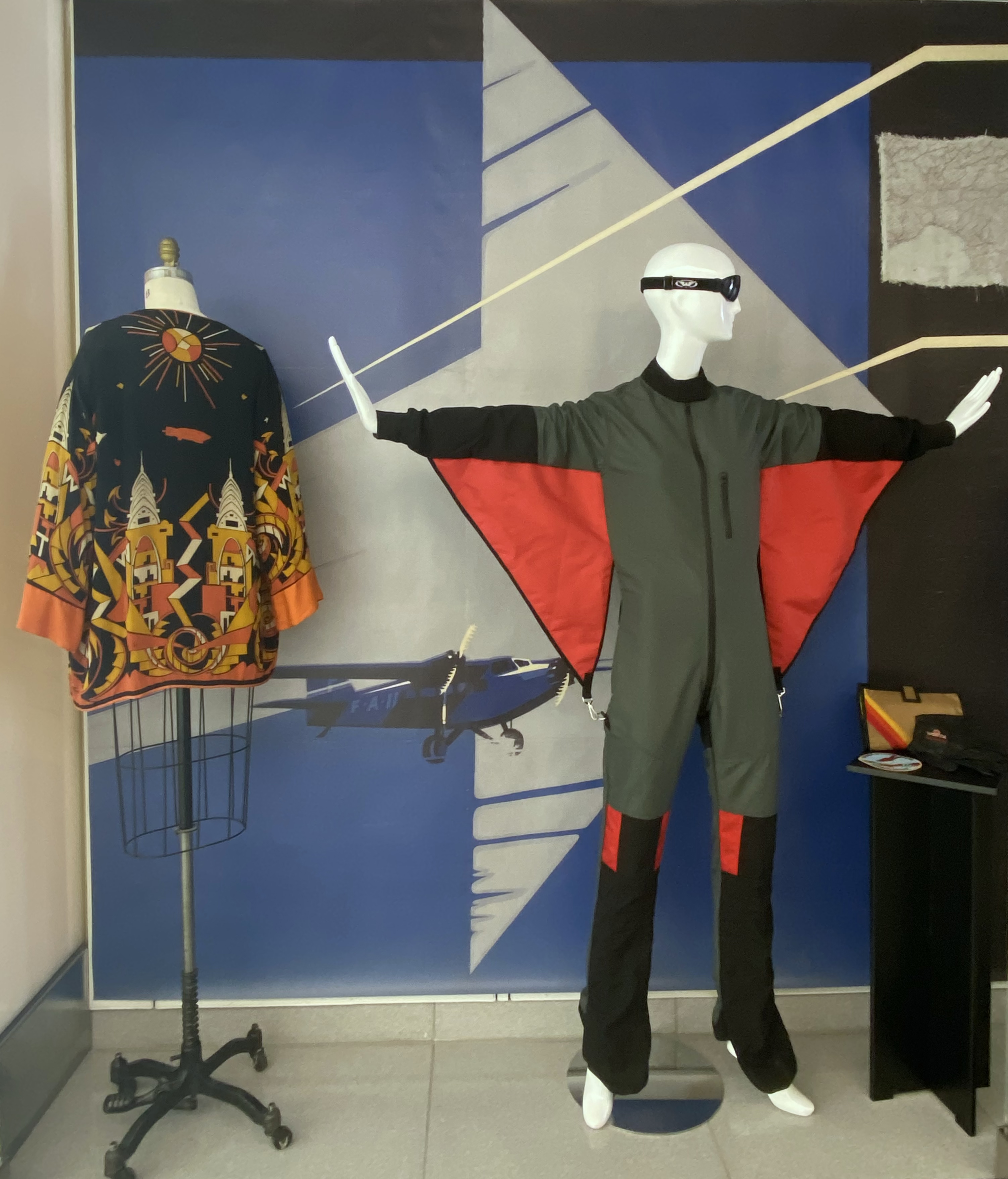 Description: Long sleeve silk jacket with orange and black metropolis art deco print. Prominent in the center back of the jacket is an orange Zeppelin in flight over the city. A Zeppelin is a type of rigid airship named after the German inventor Count Ferdinand von Zeppelin who pioneered rigid airship development at the beginning of the 20th century. 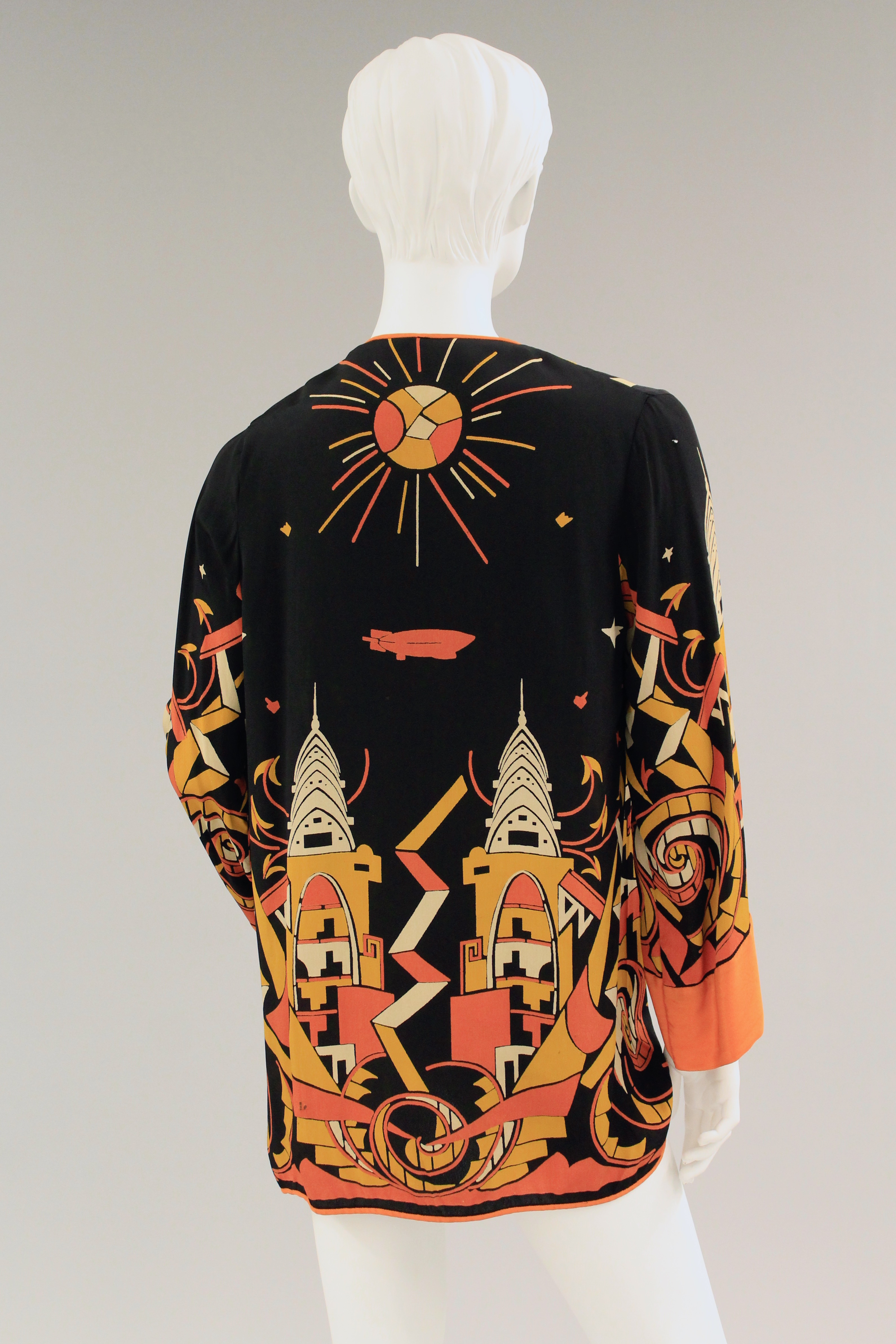 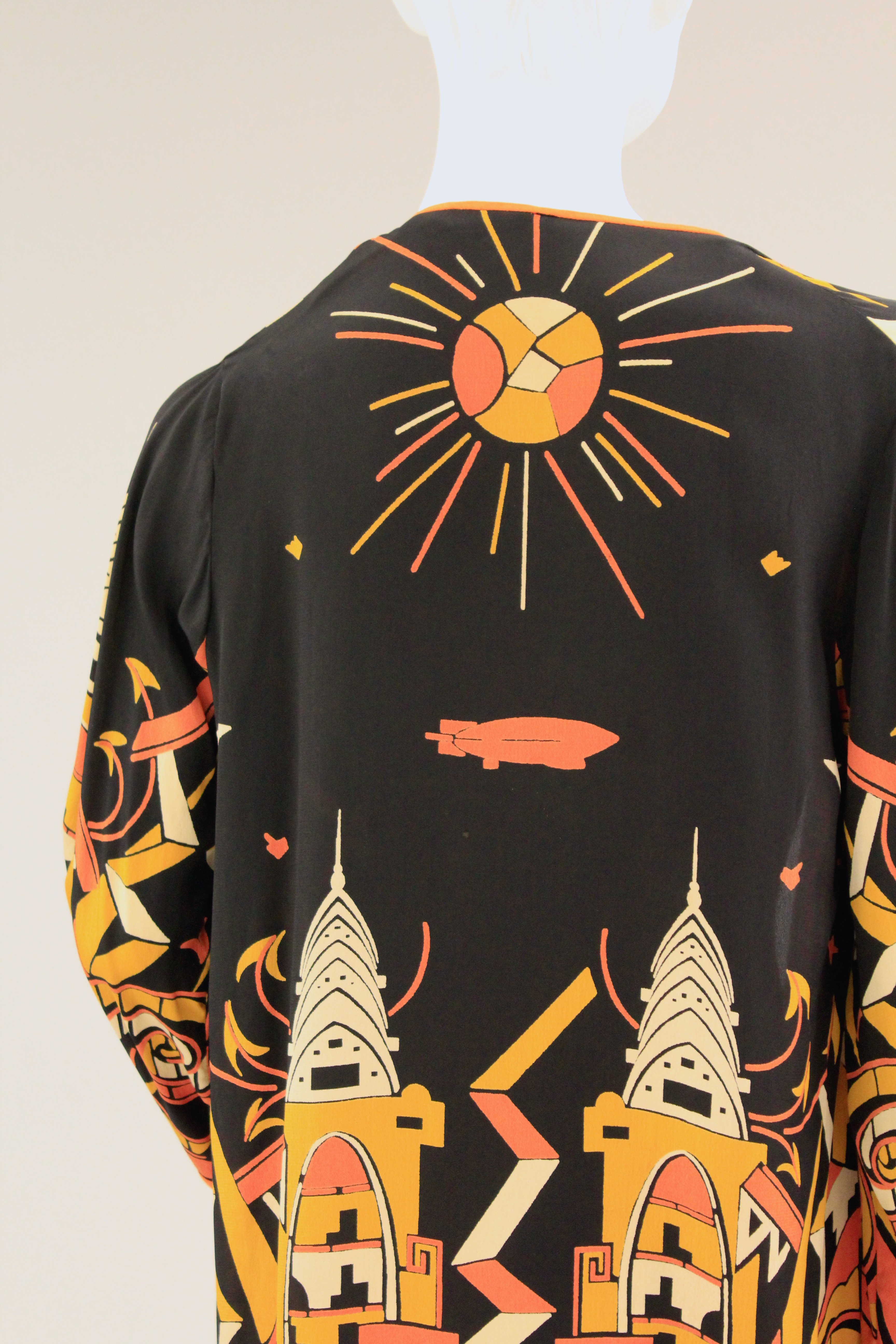 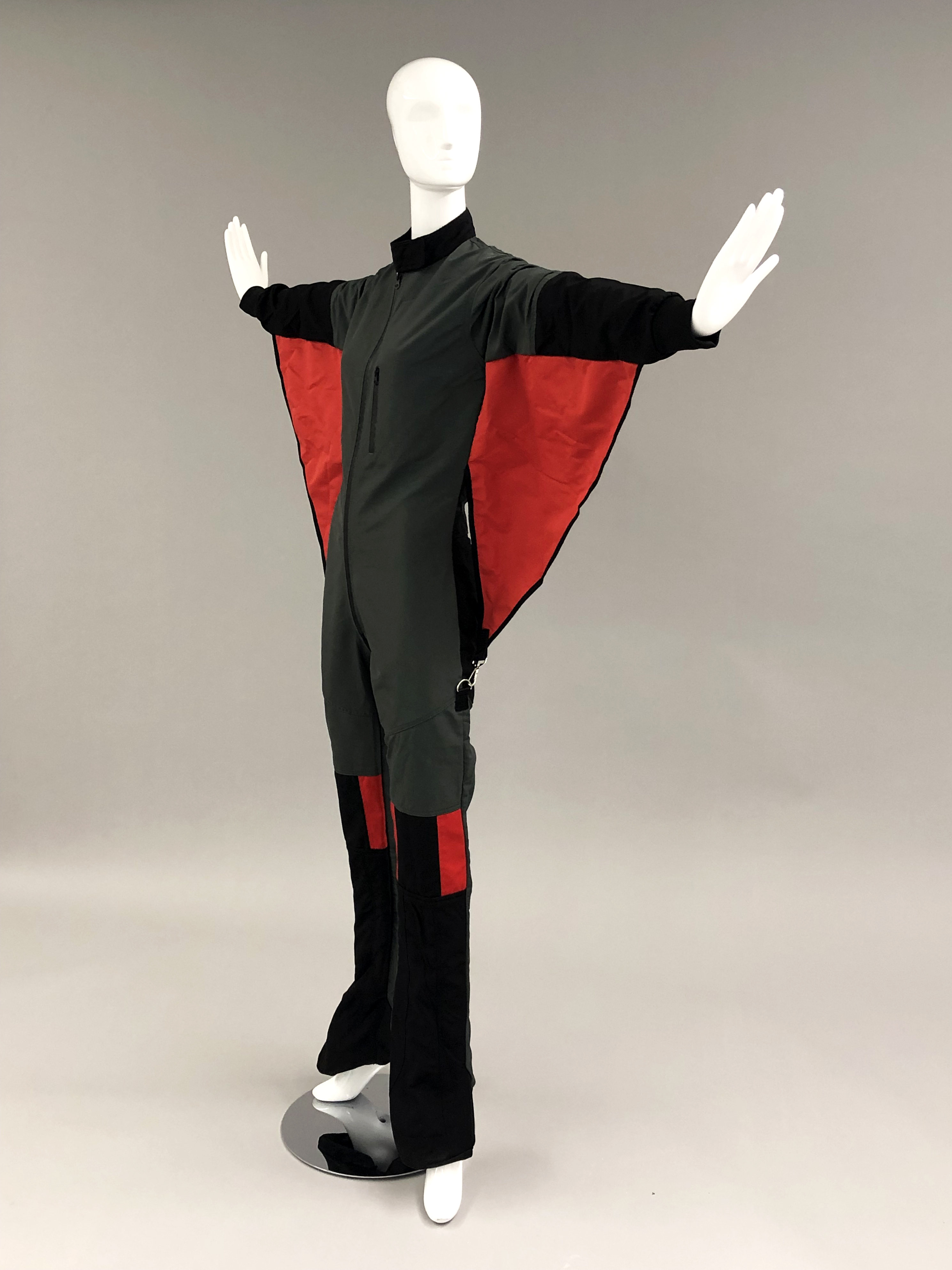 Description: This lightweight wingsuit/skydiving suit was manufactured in Australia. Its design provides skydivers with detachable “wings” under the arms that allow the wearer to steer themselves through the air in a more controlled freefall than if they were wearing a tight fitted, wingless jumpsuit. The “wings” act as sails for a downward fall before a parachute is deployed closer to the earth’s surface. A typical freefall from 10,000 to 14,000 feet in the air can last from 30 seconds to one minute, and how one spends that time depends on the equipment at hand. A wingsuit definitely adds to the possible thrills of the sport. 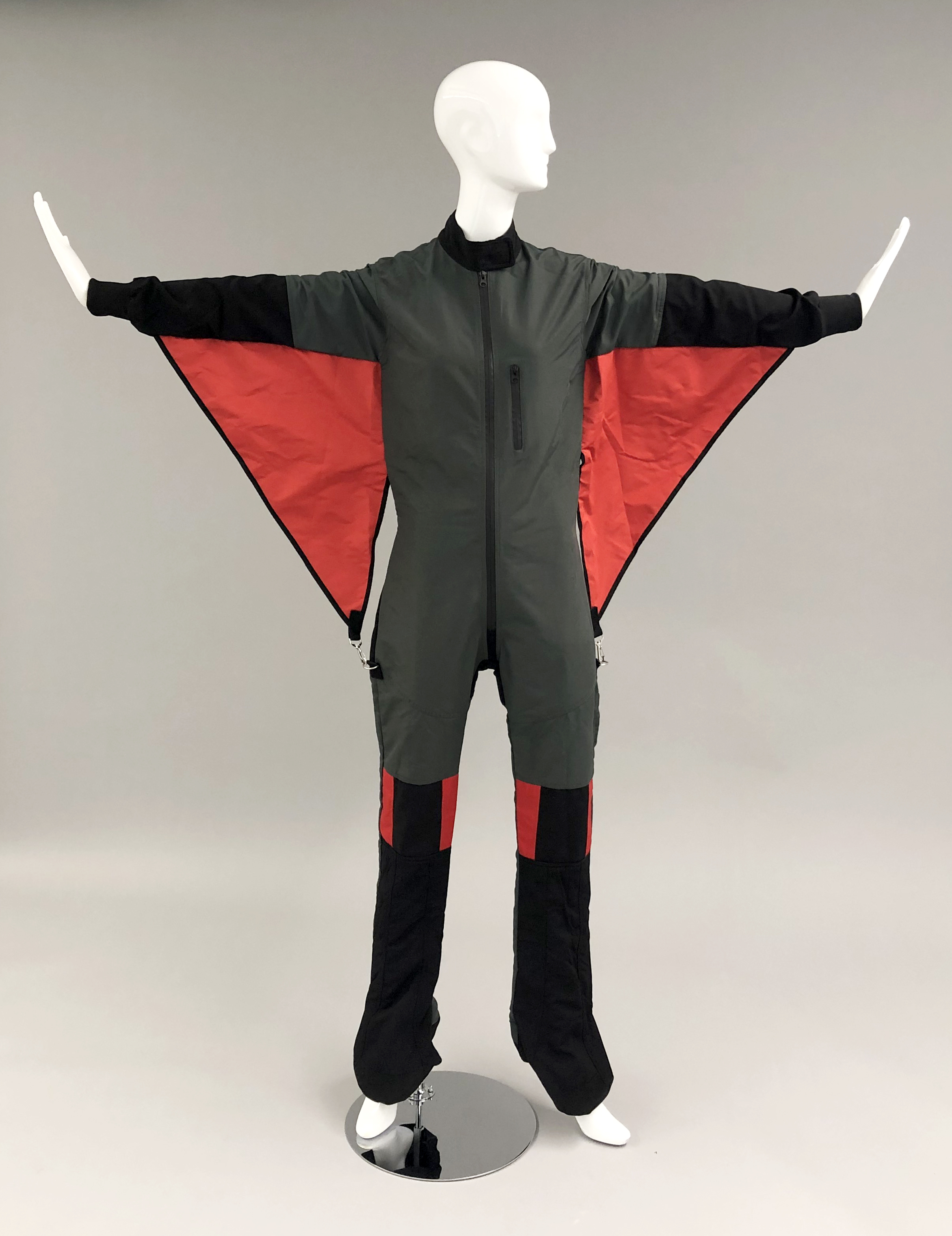 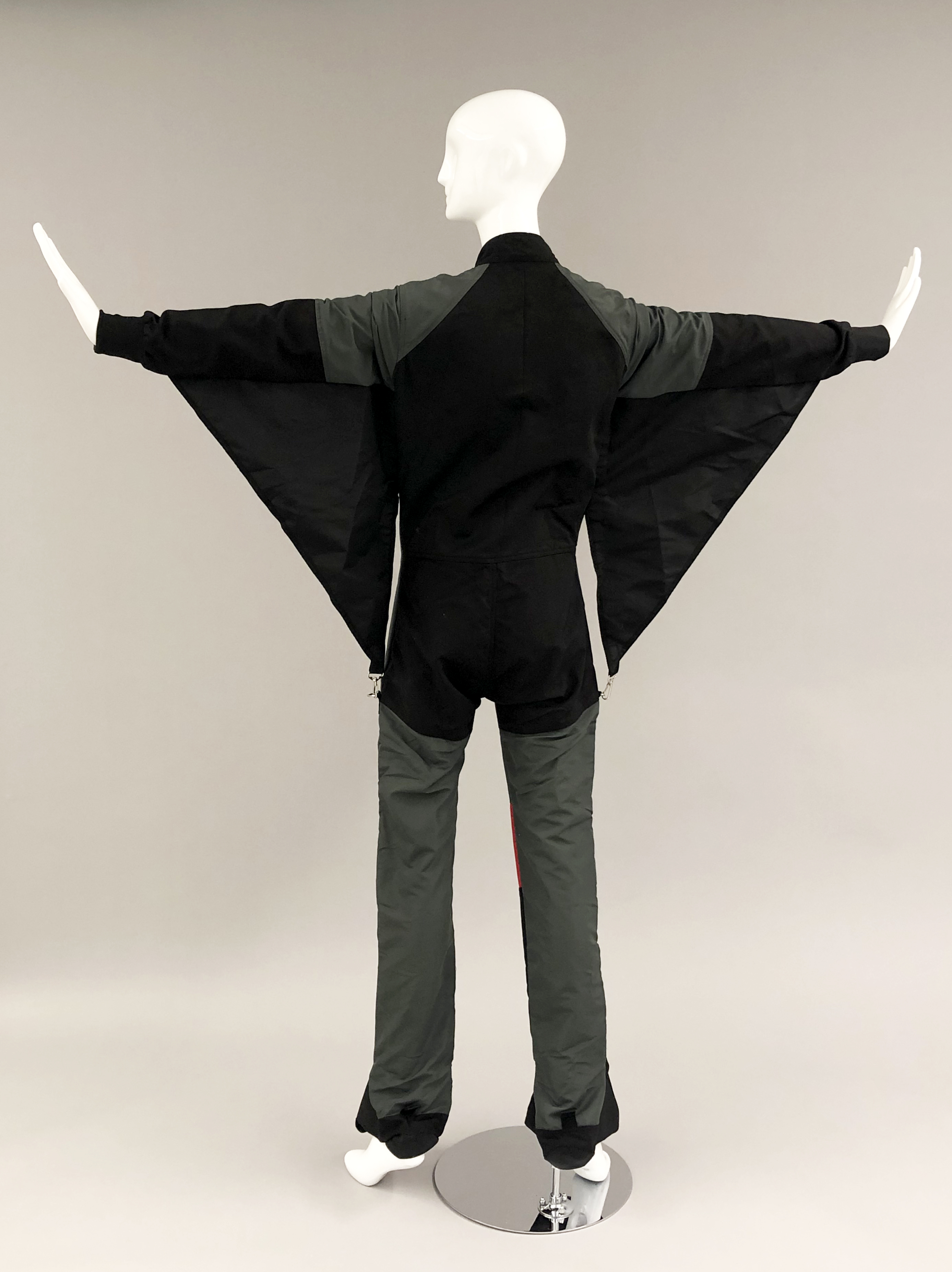 Description: As a skydiver, It is critical to wear eye protection during and before a jump. Being able to see well and make rapid calculations about your fall will help you make the safest landing, and enjoy the beauty of the “big carpet” down below while falling and steering the body thousands of feet. These specific goggles feature shatterproof polycarbonate lenses UV400 filter for maximum UV protection, a scratch-resistant coating, great peripheral vision, double-sided anti-fog coating, and a comfortable neoprene foam padding around the eye sockets.

Description: This gear bag is made of a polycotton or polyester blend and was manufactured by DAR Enterprises in California. The body is toffee-colored, accented with stitched red, orange, and yellow stripes. The interior consists of many velcros and zippered pockets ideal for a parachutist who needs to hold their materials; a logbook for recording dives and skills learned, first aid, and other necessary emergency tools. The logbook is made of leather on the cover and within it contains spaces for recording each dive, including the instructor on board, the pilot’s name, and the altitude of the specific drop. 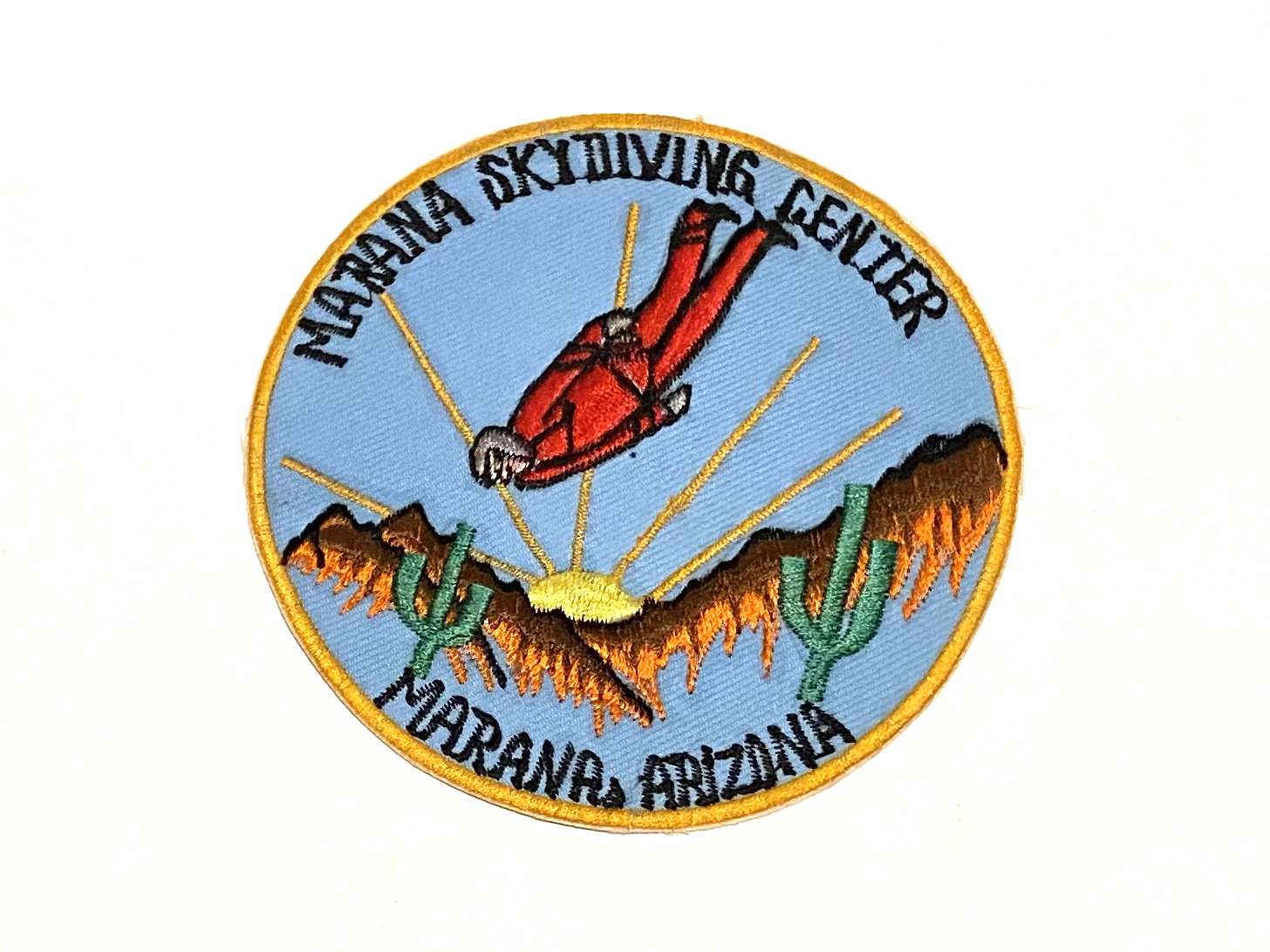 Description: This patch pre-dates the inception of the official Skydive Marana that exists today in Marana, Arizona. It was obtained before they became a commercial dropzone in 1991 when the airstrip and the landing zone was called Marana Skydiving Center. It was acquired by student Tom McDonald in 1980 when he began his skydiving career in Marana, Arizona.

Description: Escape map scarves were one of many innovative gadget inventions for the allied forces in the Second World War developed under the supervision of Christopher Clayton Hutton, who was himself a former pilot in the First World War. Known as “escape and evasion maps,” they were created specifically for pilots who would be flying over enemy warzones. Silk/rayon was an ingenious choice, the scarf could be tied around the neck and concealed so that if the pilot needed to land they would have a silent, tear, and waterproof map of the territory including occupied and free areas, roads, railway lines, crossing points, and a scale.

Description: These black leather gloves were manufactured in Korea by Worth Sports, which began in the United States as a leather horse collar producer in 1912 when George Sharp Lannom, Jr. purchased a tannery in Tennessee. When their horse collar sales began to decline, they turned their manufacturing direction towards leather baseballs and batting gloves. Skydiver Tom McDonald purchased this pair of gloves in the late seventies as he began his skydiving career. It is important to protect the body and have control while in freefall; a pair of soft leather gloves can provide the grip and support necessary to hold onto other divers as the fall takes place to form certain formations, sometimes called randoms or blocks. These freefall formations, and the skill required to maintain them, is one primary focus of the sport. 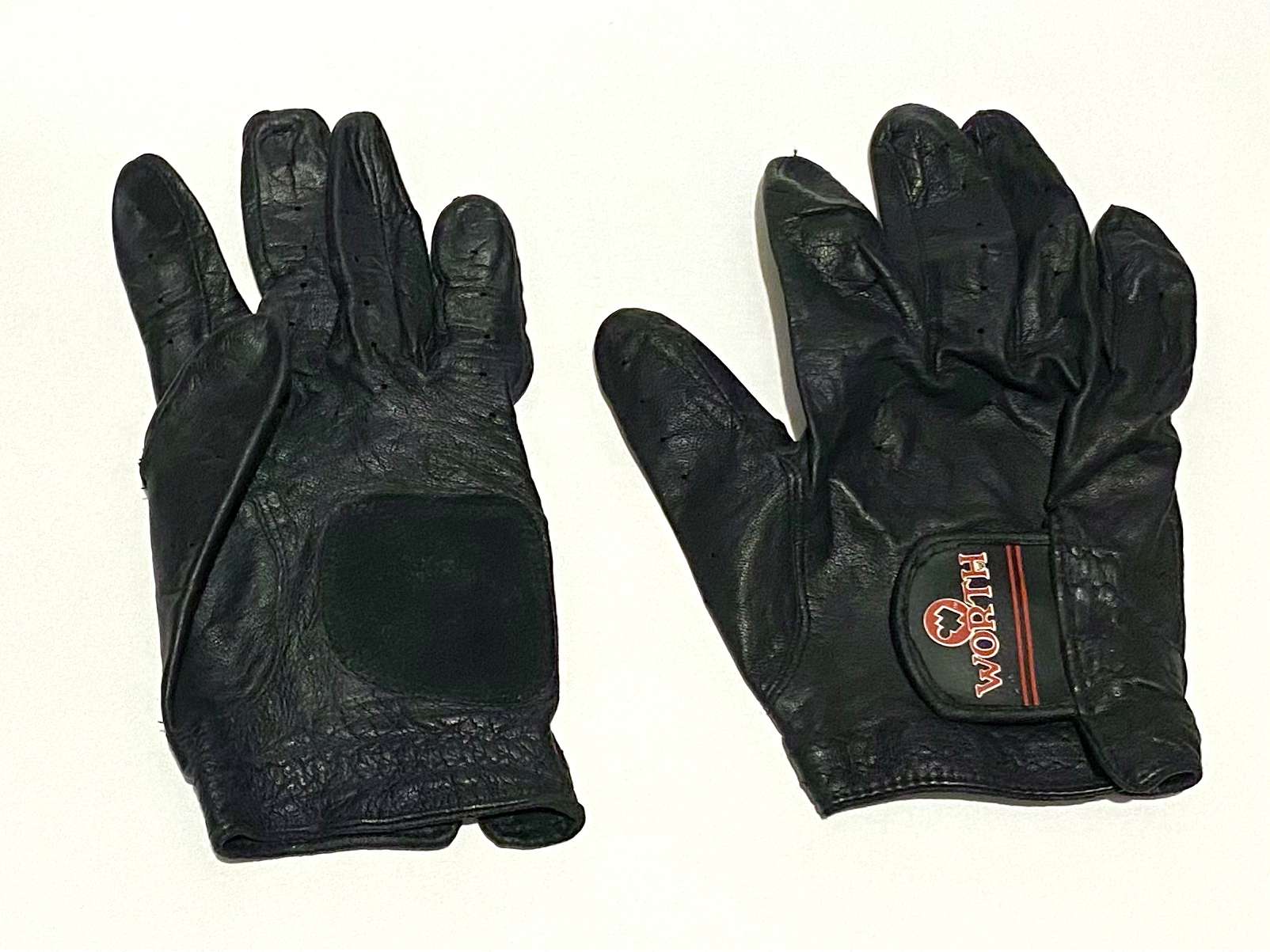 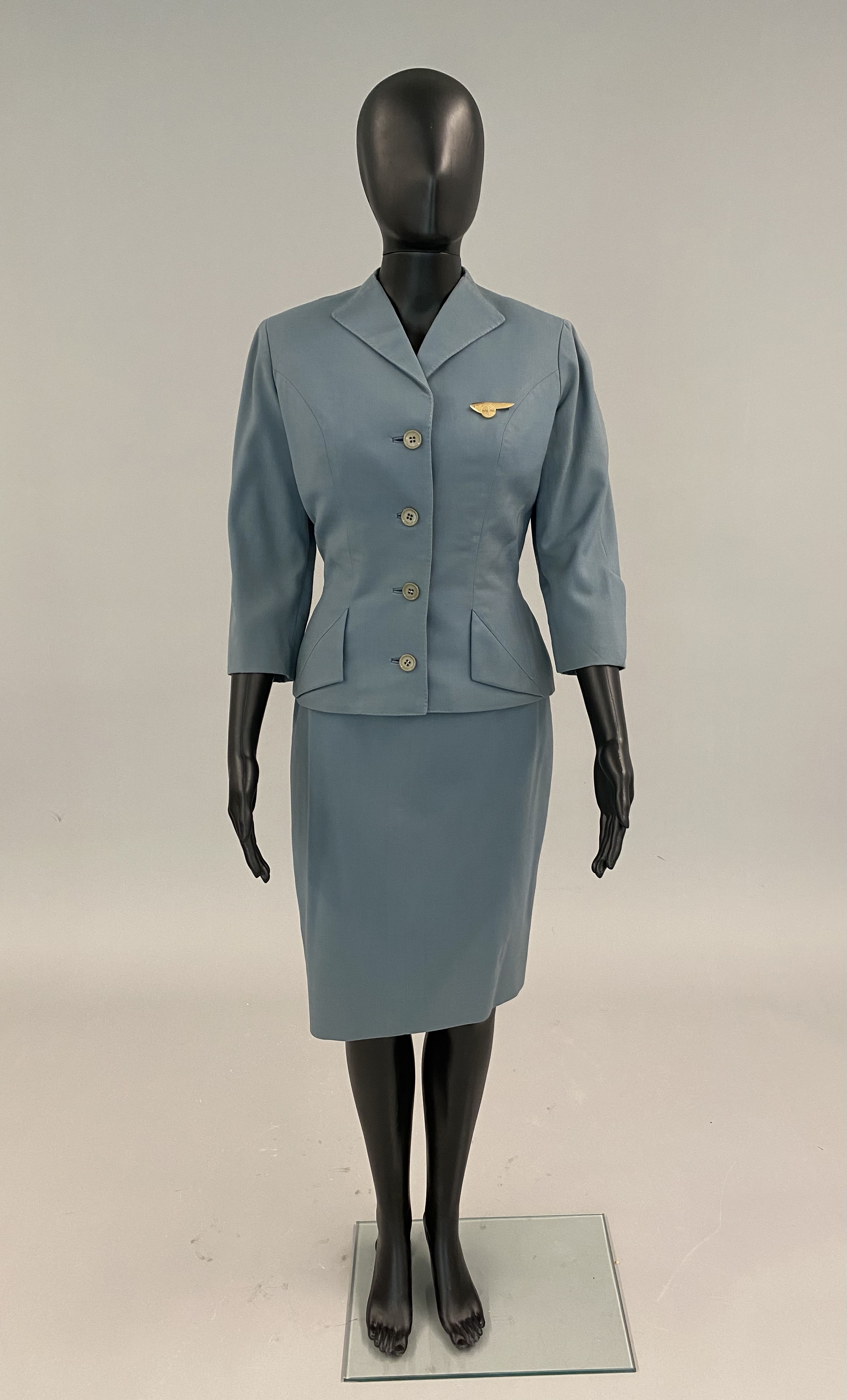 Description: Flight attendants are an invaluable part of the flight crew. They wear their uniform for the same reason the pilot wears theirs, recognizable to passengers and staff, whether in the aircraft terminal or onboard the aircraft, especially in an emergency case. This two-piece, wool flight attendant suit consists of a tailored four-button jacket with princess seams and a knee-length skirt featuring a box pleat on the back. The color is a gray-blue that appears to have faded significantly, and on the jacket’s front, there can clearly be seen two holes from where a Pan Am button was once pinned. The two angular folds at the jacket’s bottom front appear to be pockets; however, closer inspection reveals them to be a design detail. This is also repeated on the cuffs. The designer of this uniform, Don Loper, was mostly known for designing pieces reminiscent of old Hollywood’s golden age; he also designed Pan Am uniforms between 1959 and 1969. This particular uniform recently reappeared in popular culture thanks to the television show Pan Am (2011-2012). As the show takes place during the 1960s, the actresses portraying flight attendants are wearing this piece's faithful adaptations.

Since 1930, Pan American airlines provided uniform wings for its staff based on their rank and responsibilities such as Airways Radio Operator, Flight Crew, Traffic and Service Department, Flight Engineer, Pilot, Flight Mechanic, etc. Crew members could wear the pin to signal their role. The pins were not limited to PanAm staff but also customers. PanAm changed its logo design in 1944, and the design of all wings were modified. The new design conveys the connection between America and Europe through Atlantic Ocean offered by Pan American Airline.

The backdrop for this section of the exhibition is a visual excerpt from Edmond Maurus’ “CIDNA Flèche D’Orient. Paris. Stamboul. In the Same Day.” Published by Publix in Paris, this is a map-like advertisement for a French-Romanian airline in 1931. CIDNA stood for Compagnie Internationale de Navigation Aérienne and this art-deco image of a “Fokker V.IIa flying along a metallic silver arrow,” acts as a visual, directional invitation into the rest of the exhibition, while representing the verb ‘flying.’ 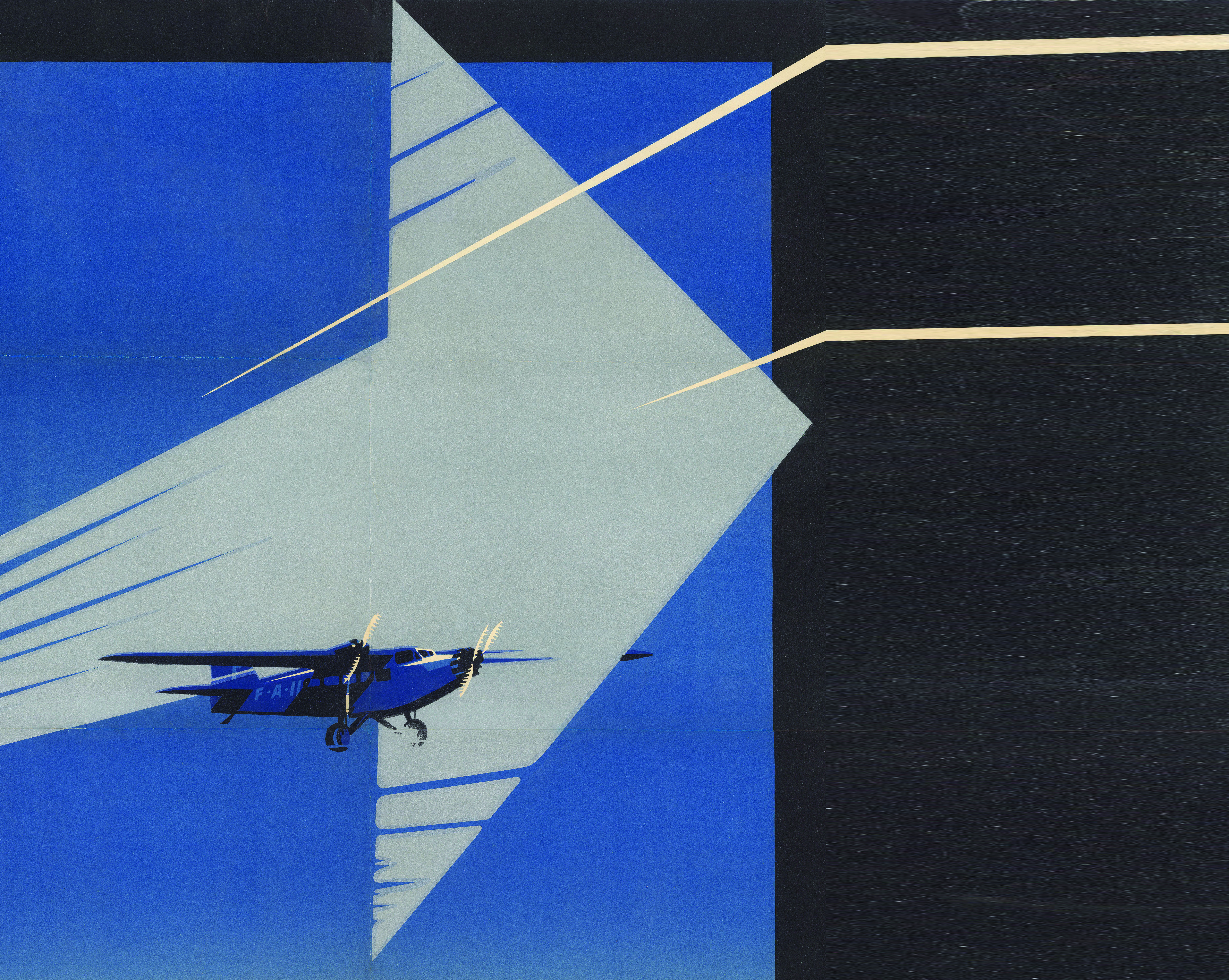 Image Courtesy of The Smithsonian's National Air and Space Museum

Description: Braniff was an International Airway only heard of by a small percent of Latin America's metropoles and the US's biggest cities. Braniff took advantage of customer's fear towards the adaption of jet traveling and the rise of feminism in the US to make his brand visible through injections of color, high-end style, and stewardesses' objectification. Emilio Pucci designed this colorful and formal-yet casual ensemble to motivate the public to travel by Braniff Airlines. This design was the most significant effort by Braniff that helped make his brand visible, reshaped womanhood, and facilitated transitioning to JET AGE. Besides its unique colorways, this outfit alleviated the difficulties that flight attendants faced while transitioning from one region to another by employing breathable and easily washable fabrics and easy packing.