Sliding relies on relatively low physical friction between surfaces, which allows for material-bodily contact to create a smooth, gliding movement. Sledding, skiing, snowboarding, sleigh riding, and ice skating are all forms of sliding transportation that rely upon frozen water in the form of ice or snow. Cold outdoor temperatures require warm clothes for winter activities, like the sleigh gloves and snowsuits found in this case. Indoor skating, while still chilly, offers more artistic possibilities for fashion, like the 1930s figure skating costume on display, created by knitwear designer Mimi Pearce. 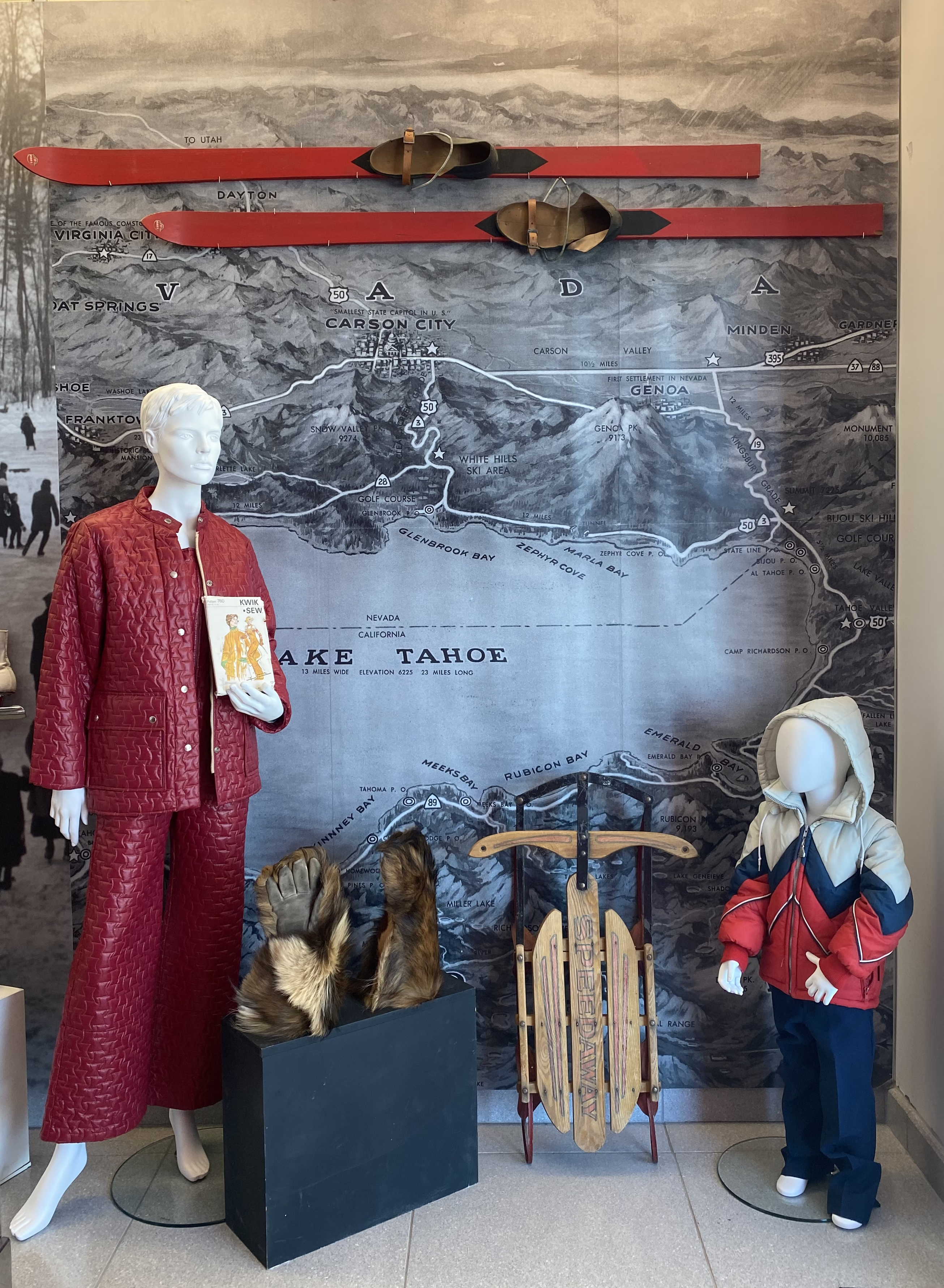 Description: This pair of wooden ice skates has oak soles with squared toes and brown, hand-stitched leather straps that fasten with buckles. The Massachusetts-based manufacturer of the skates, SC and S Winslow, was owned by brothers Seth and Samuel Winslow. Originally, the brothers’ business consisted of producing metal pieces for other companies; however, after creating a small but successful run of ice skates in 1857, they transitioned fully into skates' manufacturing. (Sullivan, 2018). Initially, they only made ice skates, but after the patent on roller skates expired in 1880, their line would later grow to include these as well.

Description: Sonja Henie was a young Norwegian woman who overtly popularized ice skating in the United States and revolutionized much of the sport throughout the world with her career beginning in the early 1920s. At the time Henie was learning to skate, women were expected to wear the normal black leather skate-boots and long wool skirts, but this did not allow for the body to perform spins and jumps safely, and so Henie and her affluent family reworked the image of the female figure skater: white leather skate-boots and knee-length skating gowns that opened up the air around the legs and feet. Henie brought theatricality to competitive figure skating and the decorative world of it today would not exist without Henie’s passion for dazzling audiences with her talent. These boots are authentic vintage Sonja Henie figure skates, part of her many retail products available during her celebrity years, as she oscillated between both the sold-out ice rink and the Hollywood stage. 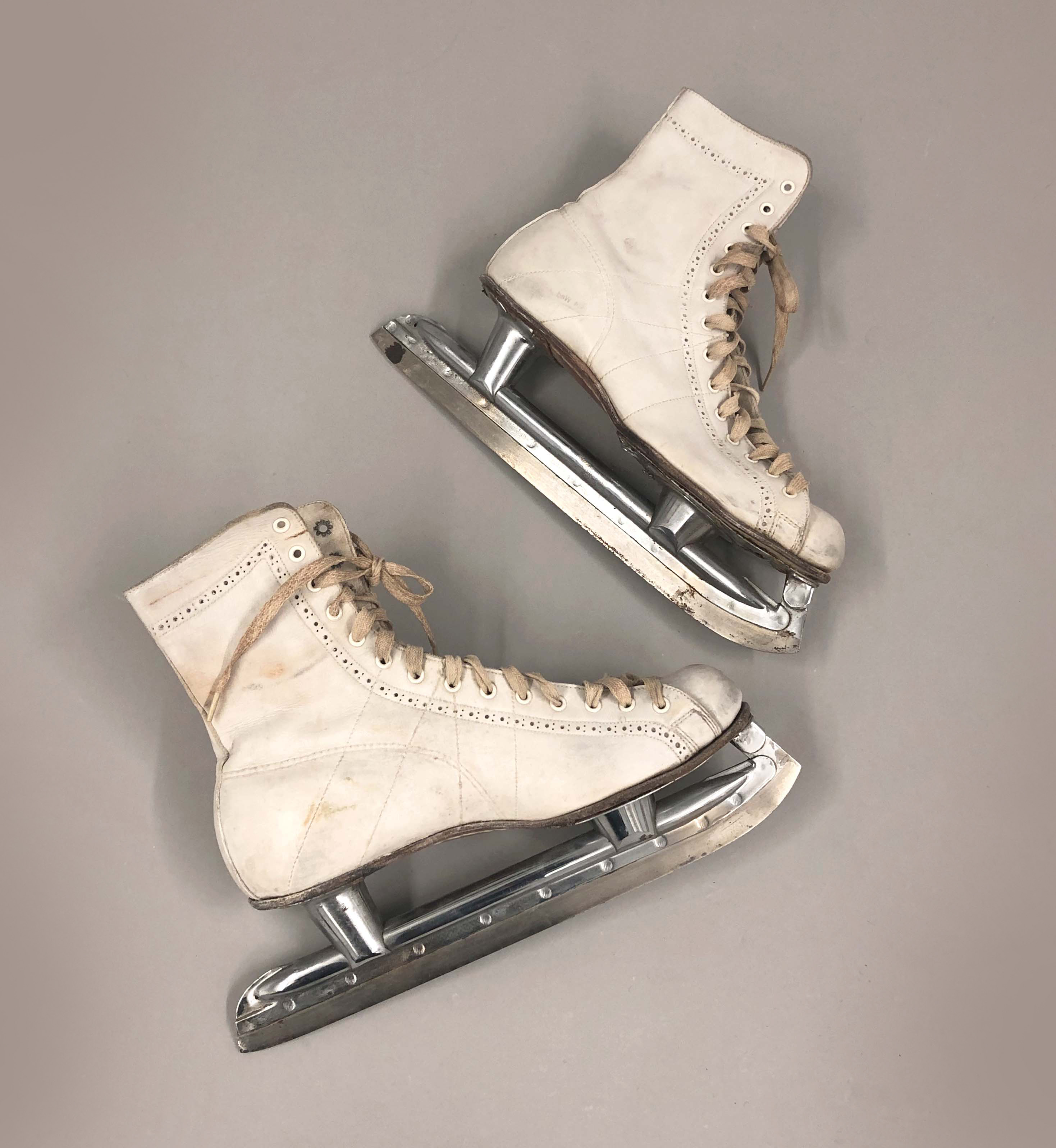 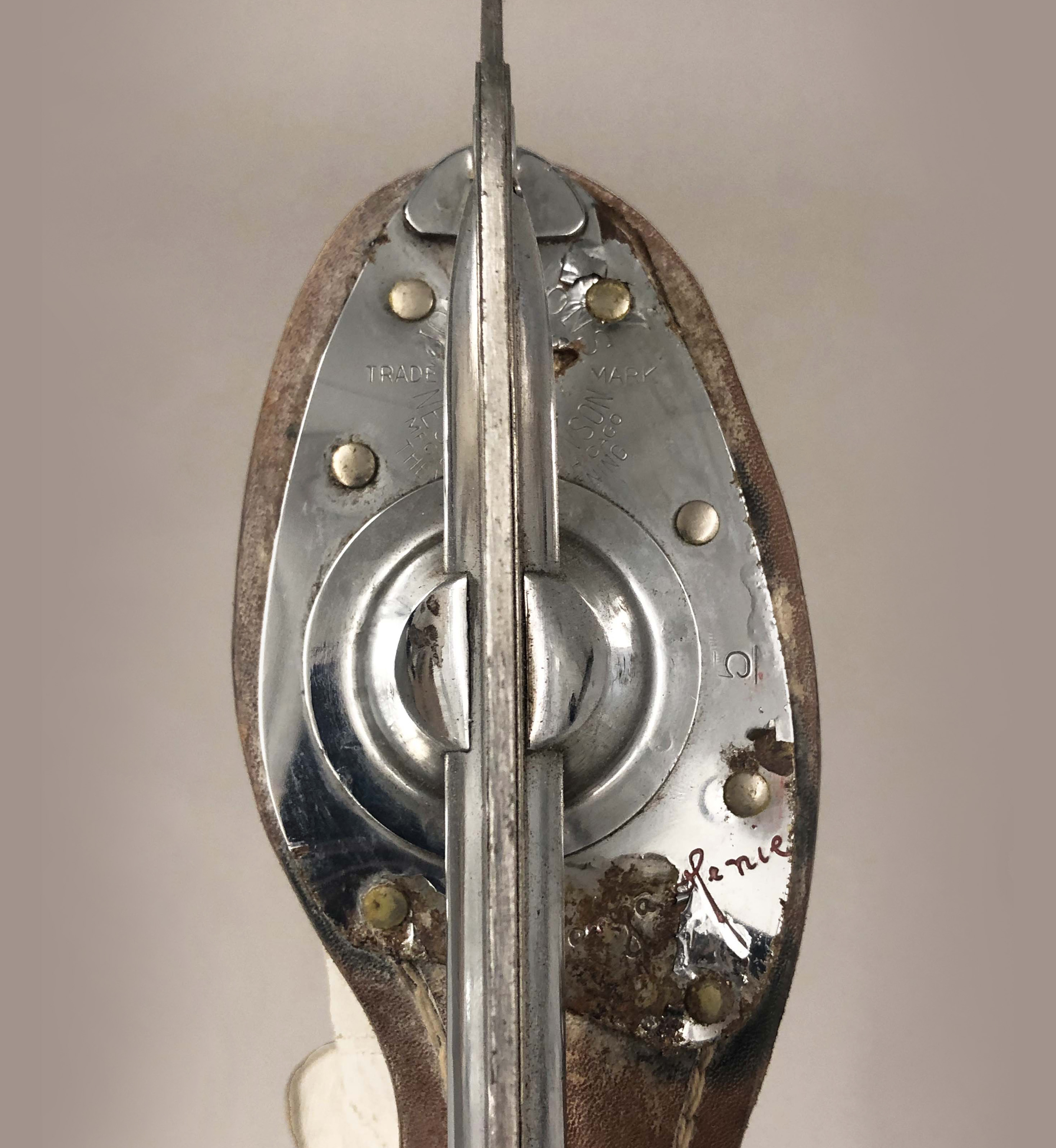 Description: This vibrant figure skating costume was created by New York-based knitwear designer Mimi Pearce in 1938. In addition to the pink, this design is also brought to life with metallic silver yarn which is used to create the undulating pattern in the bodice and tie closure at the neck. The form-fitting silhouette was achieved by having a zipper not just down the back, but also in one of the bodice’s side seams. As indicated by the garment’s tag, this dress was hand-knitted. The high-quality of Mimi Pearce’s knitwork is evident in that although this dress is now over eighty years remain in excellent condition. 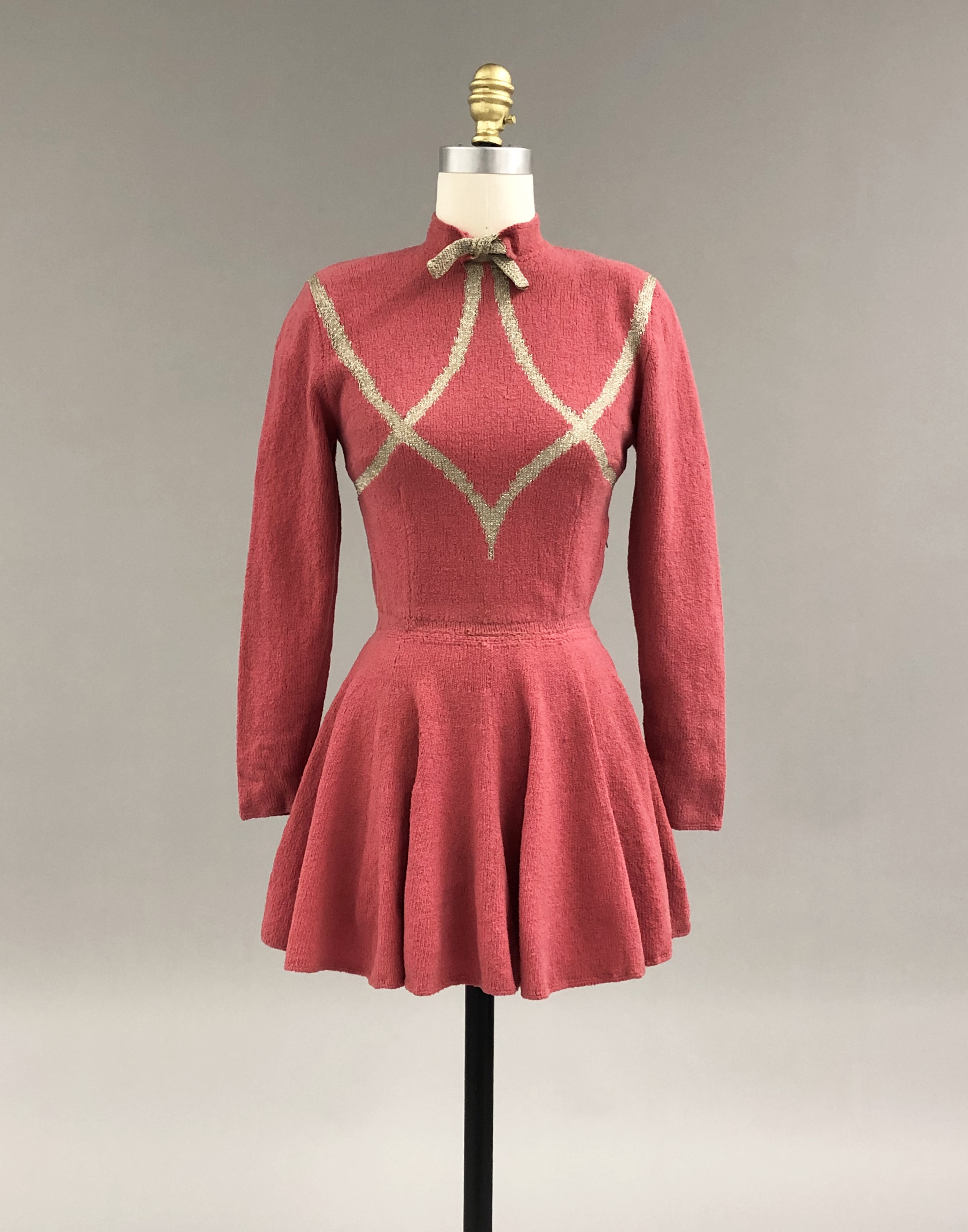 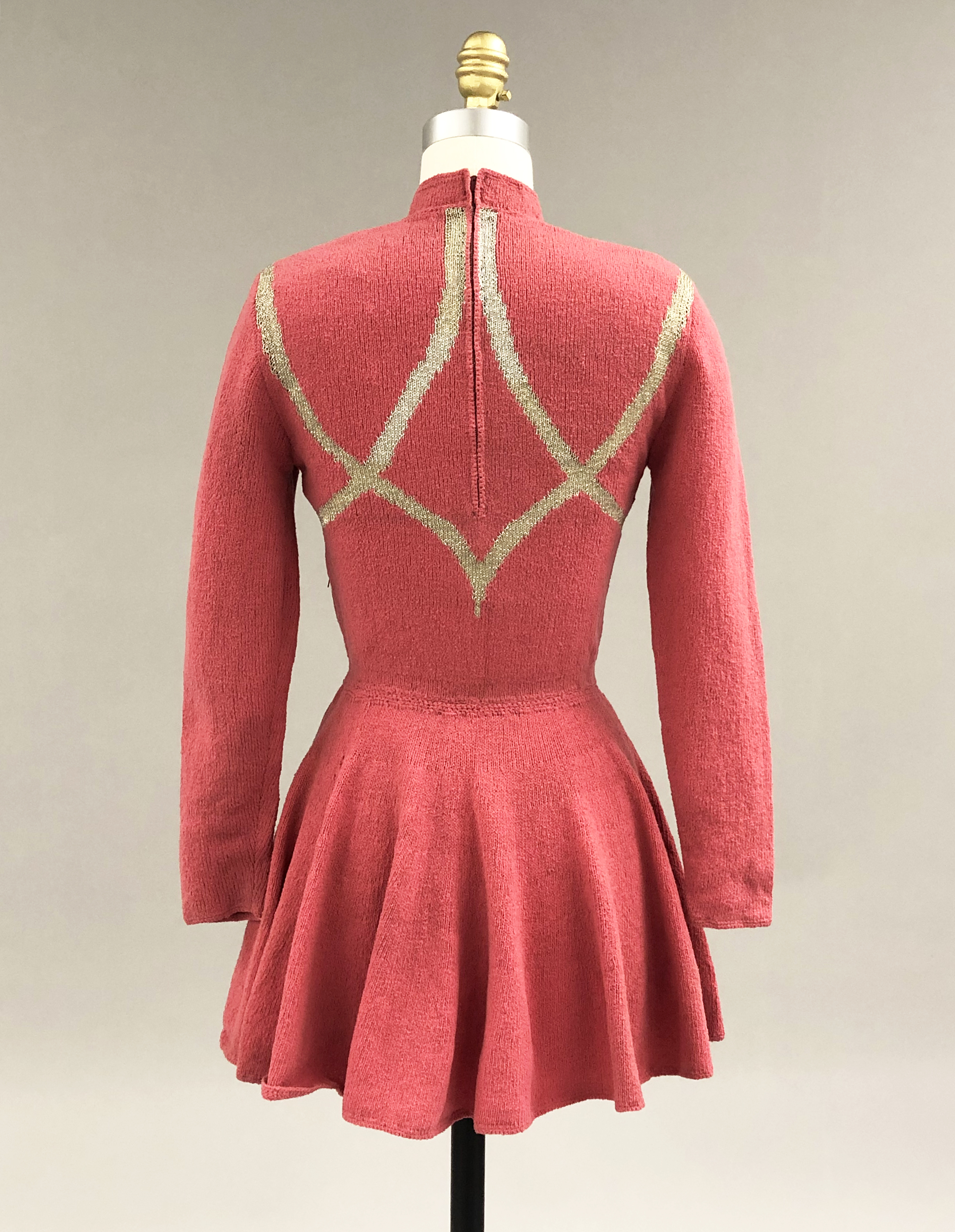 The middle section features ice skating garments, part of the sliding collection, so we selected this image of Cornell students skating on Beebe Lake; from the Archives Picture Collection in the Cornell Library and Rare and Manuscript Collections. 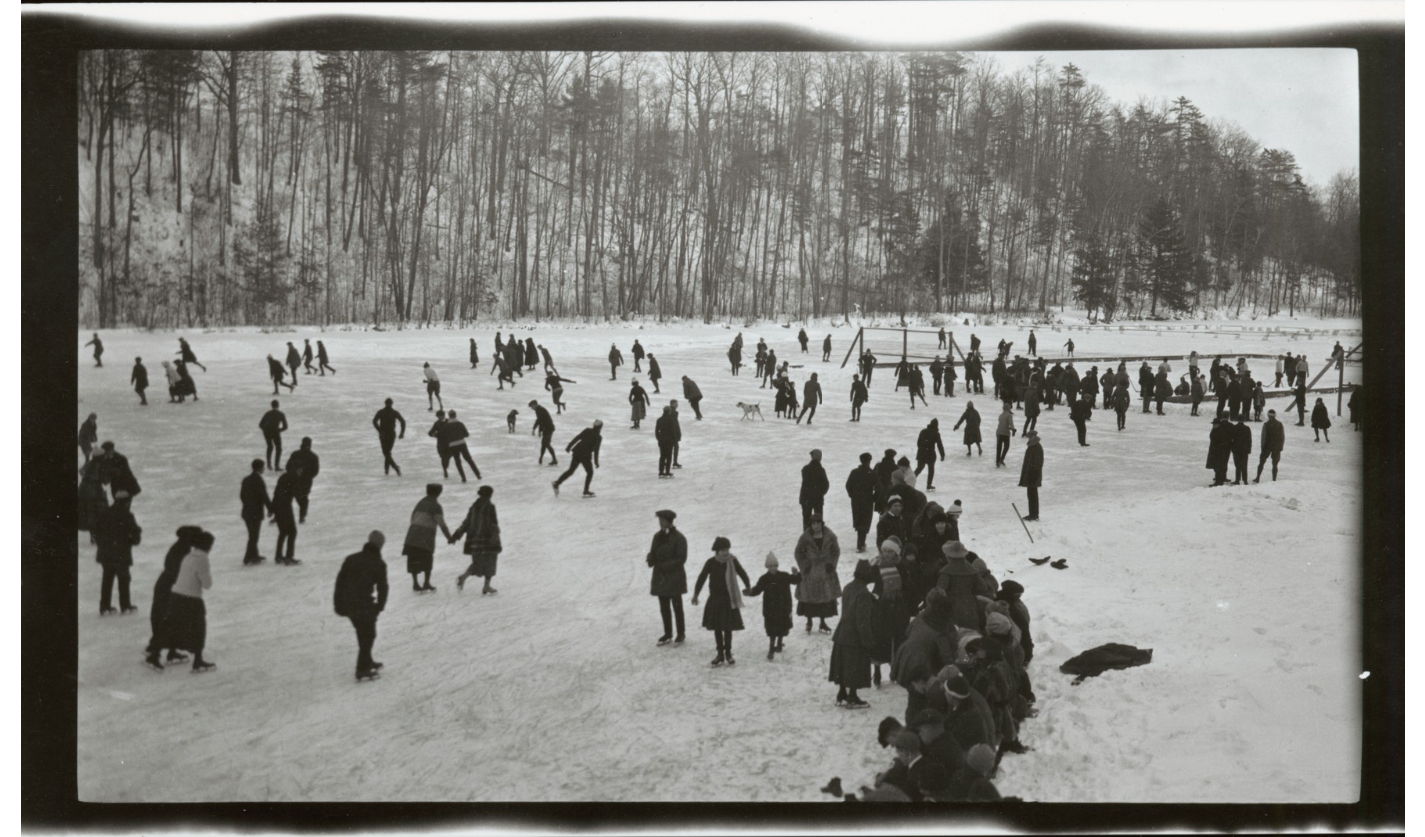 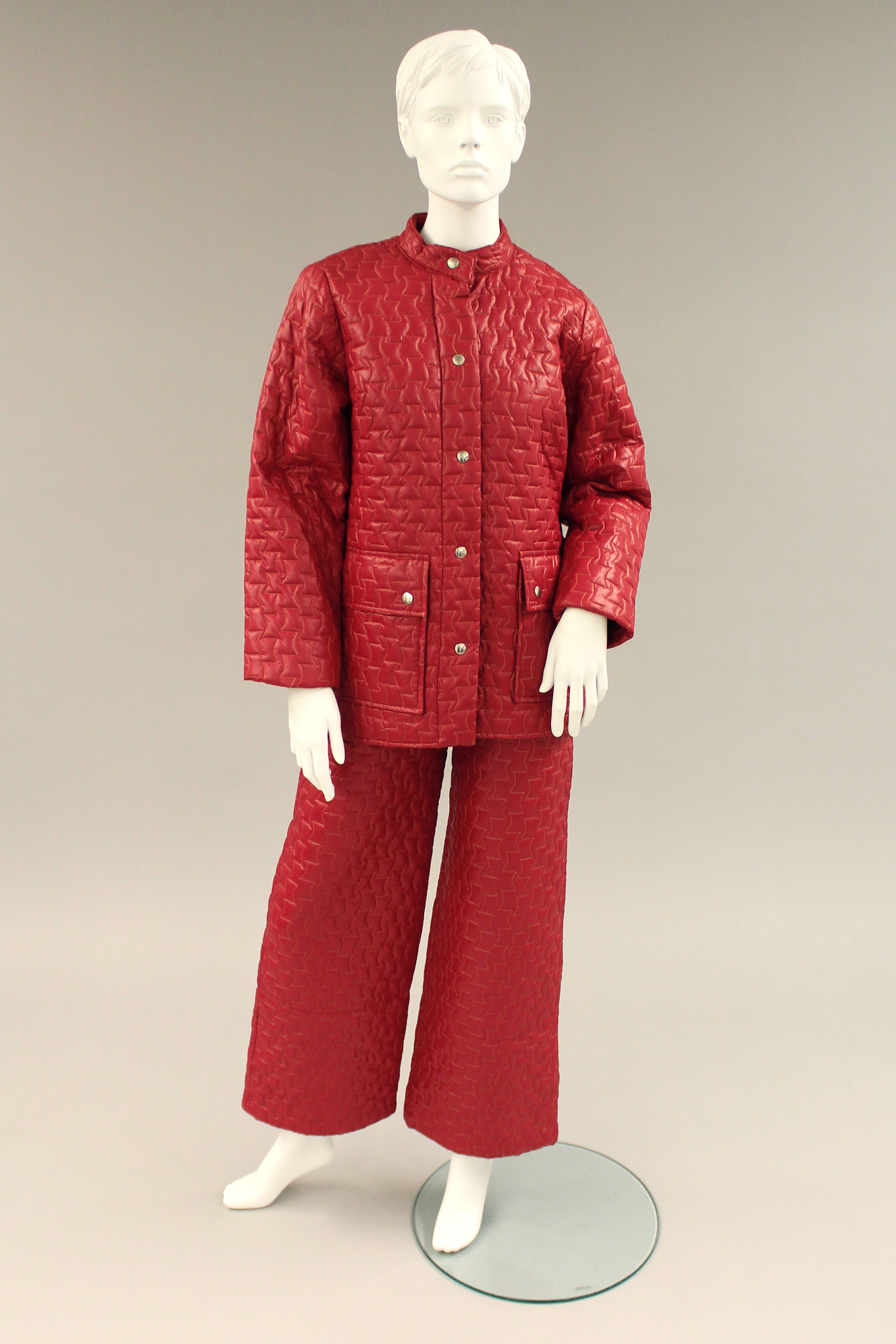 Description: This women’s ski ensemble consists of a ski parka with matching ski overalls. The garments are made of a quilted nylon in vibrant red with both a zipper closure as well as nickel snap-buttons. The overalls underneath have a long zipper running down the front and straps that form a V-shape in the back. A blue tag attached to the parka’s left sleeve details the patterns’ number and the corresponding fabric, fiber content, date, cost, and care instructions. These clues indicated that these items are factory samples for the Kwik Sew pattern company. The donor, Cornell alumni and fashion historian Elizabeth Schmeck Brown, worked for a number of sewing pattern companies during her long career in fashion. It was likely that she took this sample to add to her extensive personal archive of fashion objects. These samples were included with many other pieces that Cornell was gifted with after her death in 2006. 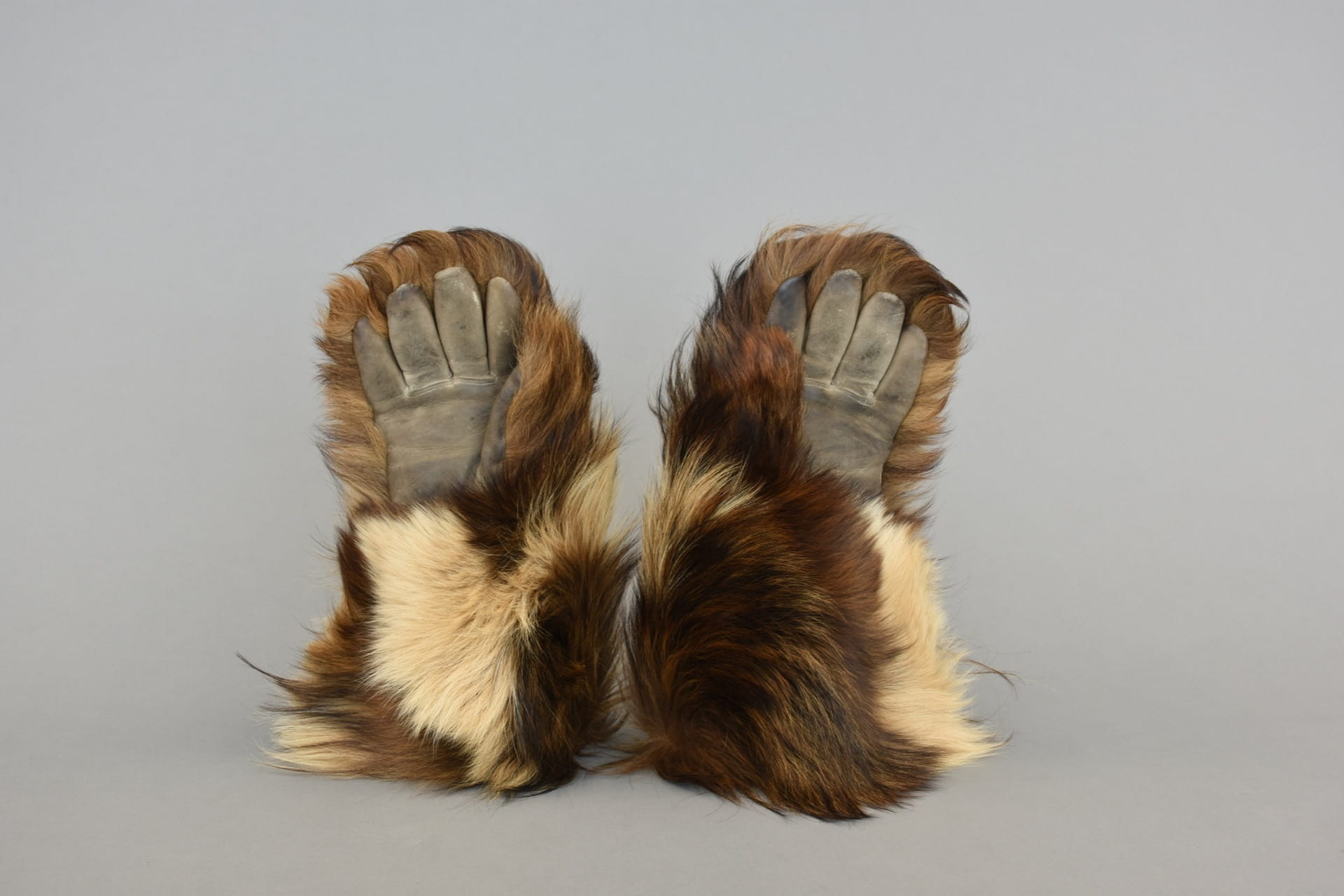 Gloves made from the hide of a well-loved family dog after the pet passed away in 1918.

Description: Dog's hair gloves, fully covered in fur except for palms-which are leather. Gloves' cuffs run up mid- forearm. Excellent insulation for enjoying sleigh riding outdoors in a cold, snowy winter. Made from hair of a family dog in 1918 by a local Ithaca tanner or leather-maker for the donor's father, George F. Warren, Jr.; for whom Warren Hall at Cornell University is named. He grew up in a pioneer family in Nebraska.

Description: This vintage sled, fabricated by the Paris Manufacturing Company in South Paris, Maine, is made of wood, metal and features decorative lines and the word “SPEEDAWAY” painted in red. Though now missing the rope that would have originally been found in the two holes drilled into the crossbar, it is otherwise in excellent condition. The sled’s length of thirty-six inches is significantly smaller than many of the company’s other sled models, indicating that this was intended to be used by young children. Before founding the Paris Manufacturing Company, owner Henry Morton was known to have made sleds such as this one in his kitchen. Though the company also made other items, such as furniture, they continue to be most well-known for their sleds.

The Pacific Trail kicked off its business with six employees, six sewing machines, and two jacket designs to catch up with the growing demand for men's outwear in WWII. The company expanded its products to girls and women's clothing in 1969 and has now been transformed into a major outdoor apparel producer. This three-way color-blocked jacket is made of nylon and polyester. The shoulder section spreads across arms, made of white cut into points over the upper arms and chest, outlined with a wide band of blue above a red body soft fleece lining, plastic zipper, and a Pacific Trail Logo zipper pull. 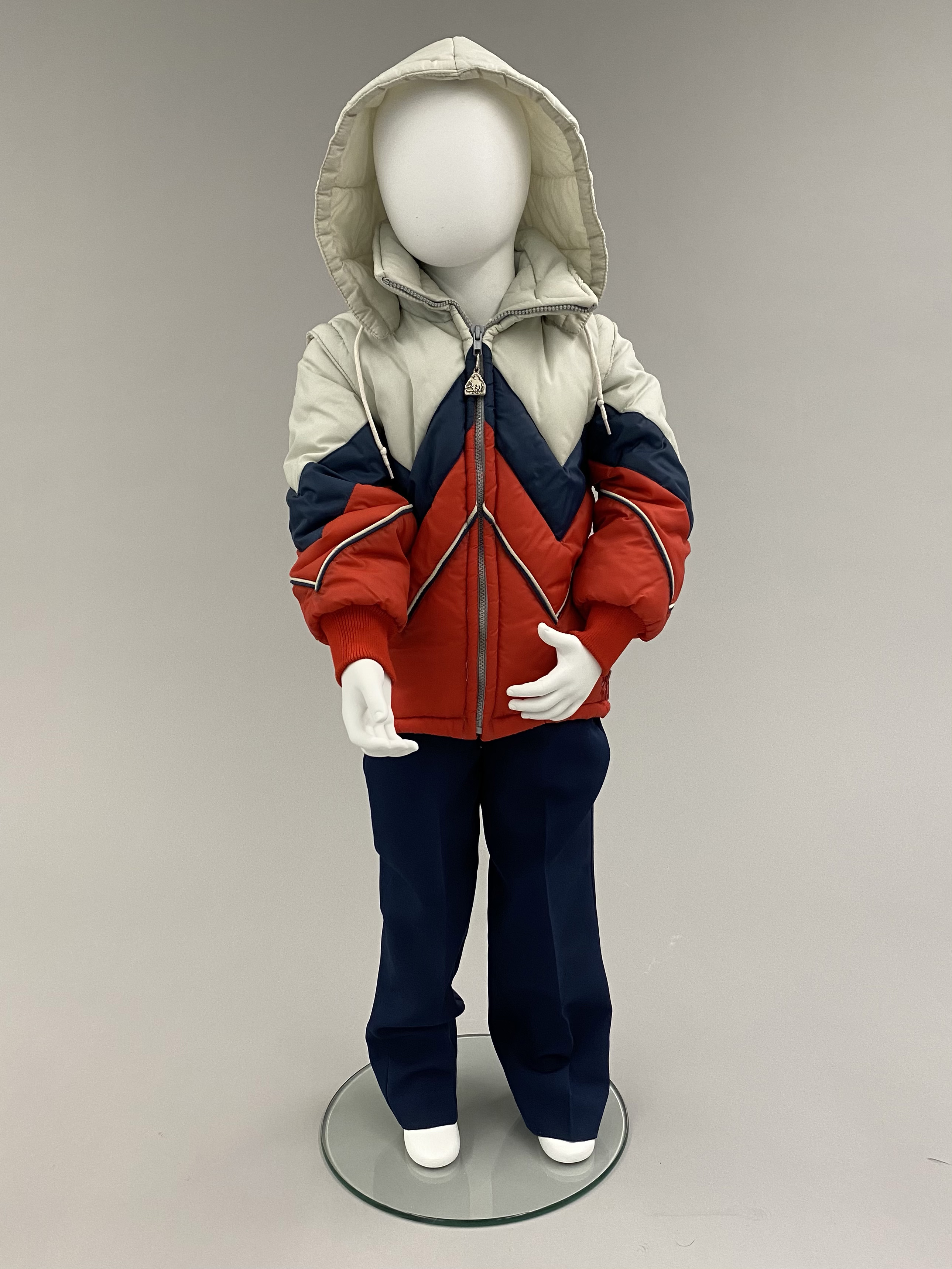 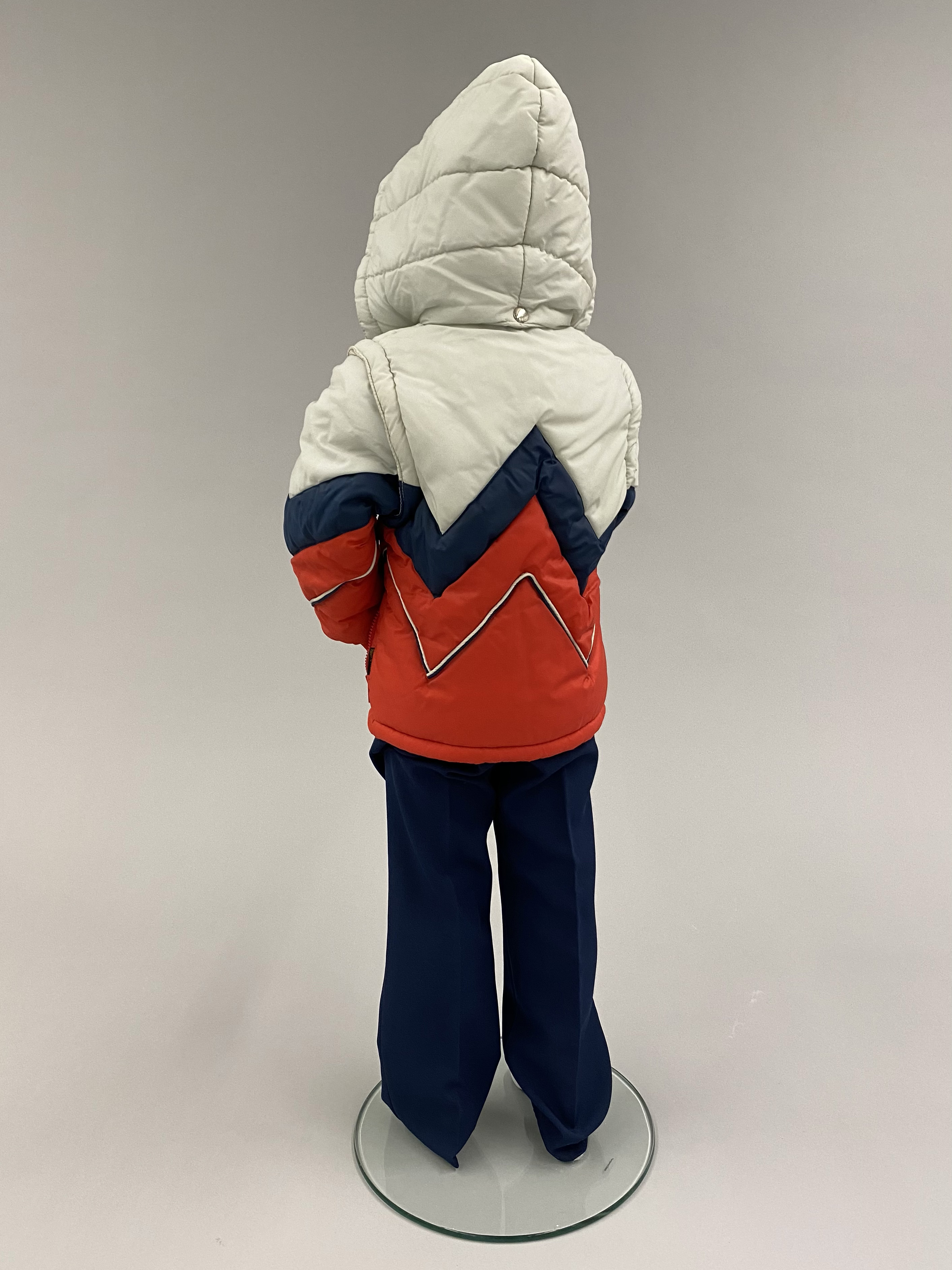 Description: These vibrant red skis were manufactured by the C.A. Lund Company, founded by Christian Lund in 1911. Owned by the Northland Company, Lund was known for producing quality wooden skis, toboggans, and snowshoes at an affordable price. Likely, these skis were intended to be used for slalom, downhill, or touring as their length of six feet makes them too short for inclusion in Lund's jumping or racing lines. However, the excellent condition of the rubber footplates, paint, and bare-wooden bottoms indicate that these were used infrequently, if ever. It's possible that they were instead hung on a wall over a fireplace for decorative purposes.

The leftmost image is by Winston O. Link titled “Hawksbill Creek Swimming Hole, Luray, Virginia” and was taken around 1956 and printed years later in 1998. It is also included in another part of the exhibition, “Visualizing Transit,” at the Johnson Museum of Art and online. Link was famous for photographing the “death” of the steam locomotive and well-lit scenes using a film camera at night.

The middle section features ice skating garments, part of the sliding collection, so we selected this image of Cornell students skating on Beebe Lake; from the Barbara Ann Johnson photo album in the Cornell Library and Rare and Manuscript Collections. Johnson was a student, class of 1952, at Cornell when she took this and many other campus images showing everyday life.

This rightmost part of the background is authored by Gerald A. Eddy in 1945. The short title of the work is “Lake Tahoe - Sierra Association. California — Nevada.”

It is originally 46cm high by 62cm wide. This map is a full color “panoramic bird’s eye view” of Donner Pass Summit in the lower left to Blue Mountain in the lower right. The map is both topographical and well described; we selected this work because it artfully names many skiing areas in the Lake Tahoe region, such as Tahoe City Ski Hill and Squaw Valley Ski Area. 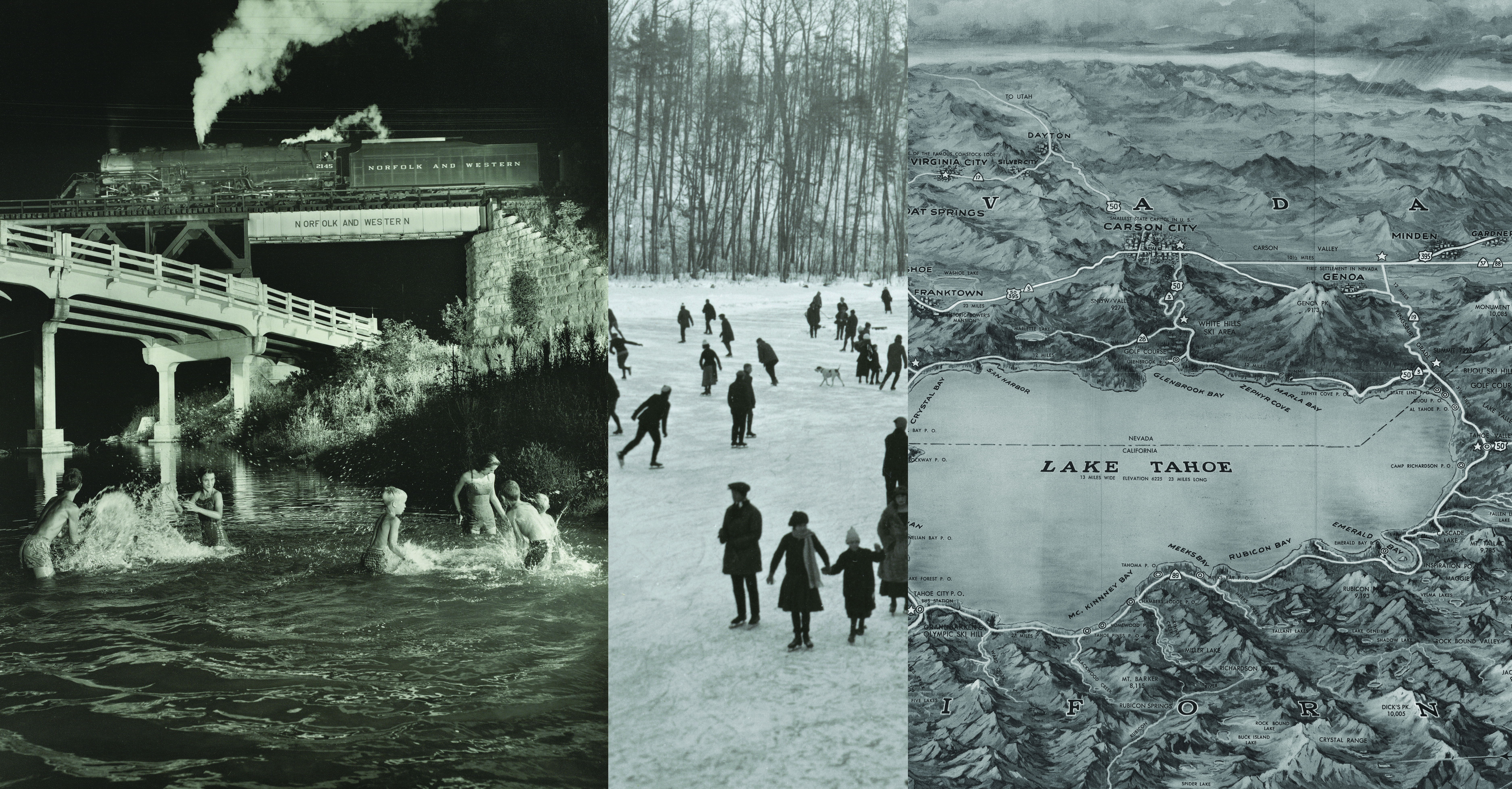 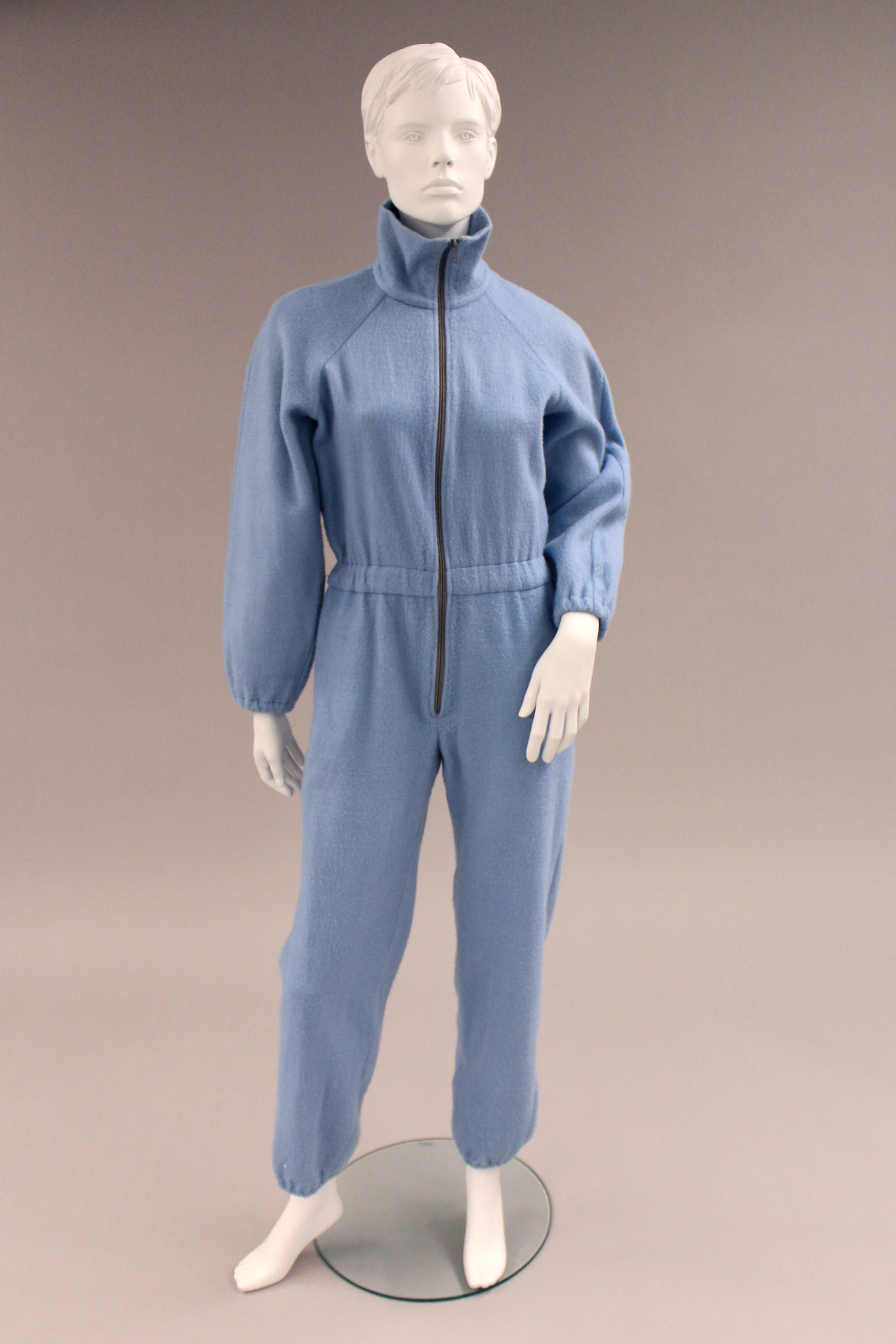 Description: Light blue fleece-like ski jumpsuit. Grey zipper down center-front with hand pockets in side seams. Elastic in casing at wrists, waist, and ankles. This snowsuit is by Ted Lapidus for his Diffusion Sport line. Ted Lapadious made a huge transition in French fashion by proposing safari suits and military jackets for women, along with unisex clothing. Additionally, he had a significant role in translating haute couture into affordable clothing.