Interpreting “transit” in an artistic way led us to contemplate movement on a more poetic level, diving into what it means to be a body in motion, through the air, the earth, the water, and through space and time. The gaps left in the wake of verb-categorization have stream beds in artistic interpretations, considering dance, directorial photographic scholarship, line and intuitive drawing, transitory feminist typologies, and stitched-soaring narratives. We thank the Herbert F. Johnson Museum of Art for their collaboration in accessing these visual works of art. 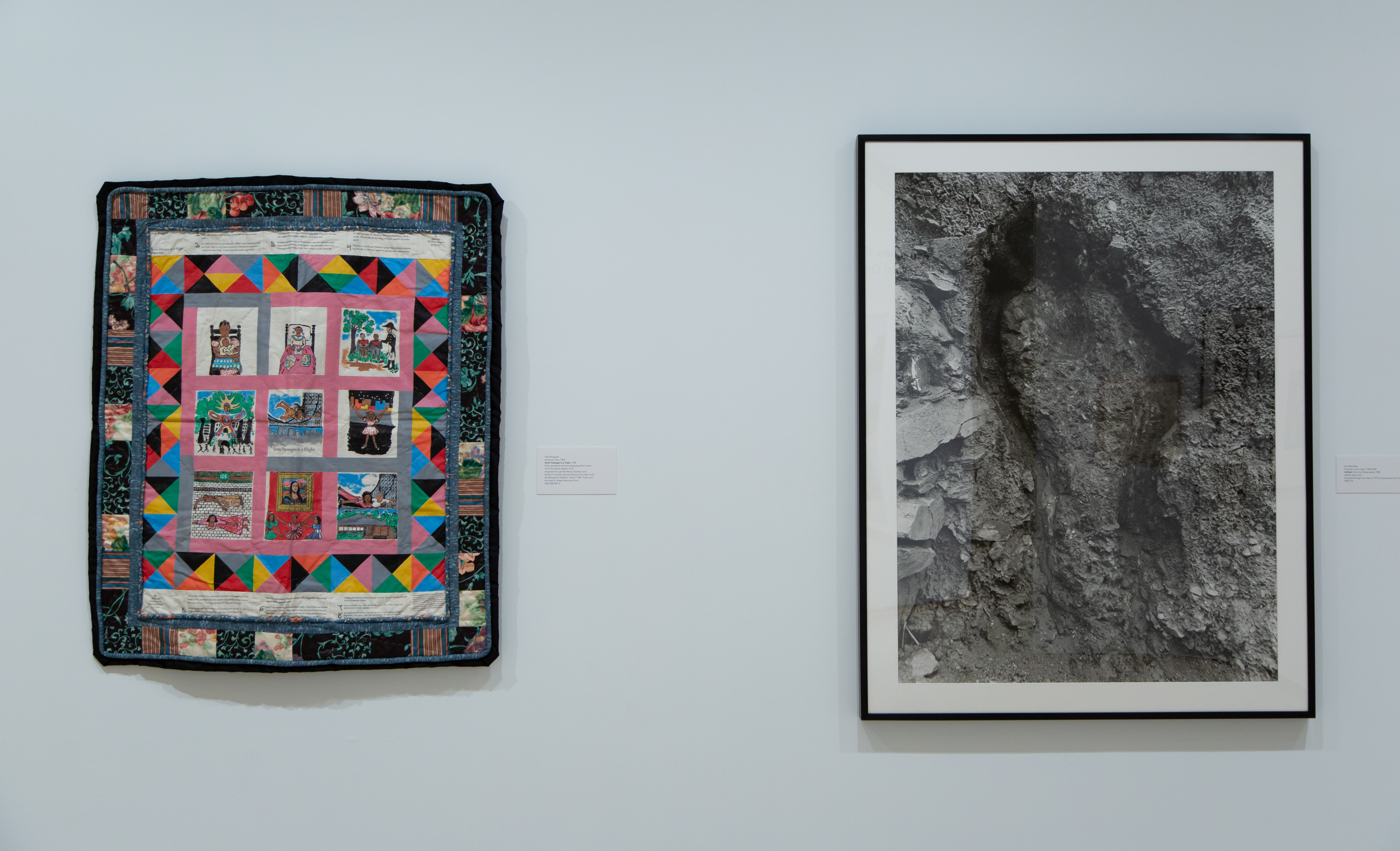 Seven Passages to a Flight

Medium: Quilt, produced with accompanying artist's book From the deluxe edition of 10

Purchase Fund, the Marguerite Gelfman, Class of 1987, Fund, and the Peter B. Ruppe

Description: Though highly acclaimed American artist Faith Ringgold has an extensive body of work in a variety of mediums, she is most well-known for her story quilts such as this one. The mixed-media story quilts are created through a combination of sewing and quilting techniques paired with painting and narrative text. It is through these pieces that Ringgold addresses the lives and stories of Black Americans as well as her own personal history. The highly personal Seven Passages to Flight pairs nine etching depicting scenes with autobiographical text descriptions that range from the quotidian to the fantastical. 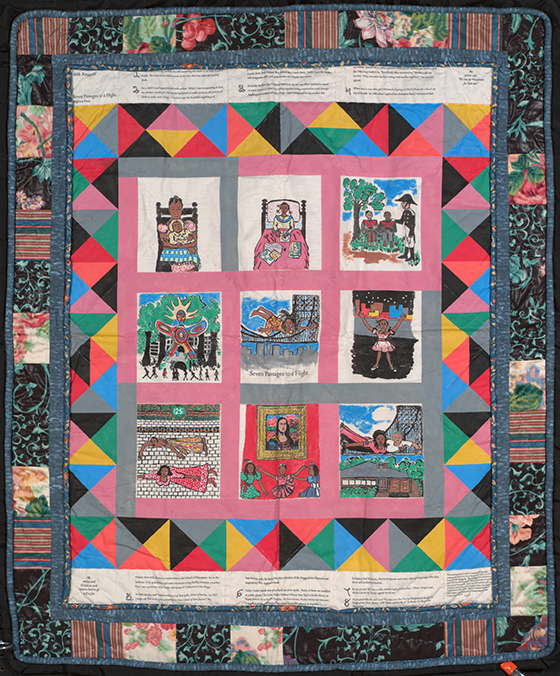 Untitled, From the Silueta Series

Description: A multidisciplinary artist, Ana Mendieta’s works circulates the spiritual connections between the body and nature via performance, sculpture, film, and drawing. Mendieta came to the United States as a Cuban exile in 1961, leaving many of her family members behind, creating a traumatic separation of culture that significantly impacted her artwork.

Her Silueta (Silhouette) series began in 1973 and employed a typology of abstracted feminine forms, through which she hoped to access an “omnipresent female force.”¹ Working in Iowa and Mexico, she carved and shaped her figure into the earth, with arms overhead to represent the merger of earth and sky; floating in the water to symbolize the minimal space between land and sea; or with arms raised and legs together to signify a wandering soul. These bodily traces were fashioned from various materials, including flowers, tree branches, moss, gunpowder, and fire, occasionally combined with animals’ hearts or handprints that she branded directly into the ground. 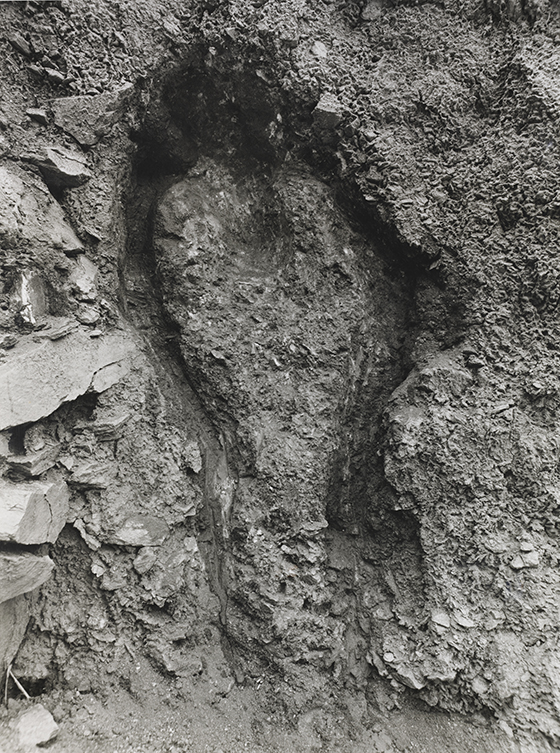 Image Courtesy of the Johnson Museum

Description: Pablo Ortiz Monasterio is a highly influential and prolific Mexican photographer known for capturing unflinchingly honest images that depict the beauty, but also the ever-present risk of violence and intense hardship, that characterize life in contemporary Mexico. In his photo books, Ortiz Monasterio frequently chooses to juxtapose his imagery with poetic text written by a collaborator. This particular image was included in the dystopian-themed book “ La Ultima Cuidad” (“The Last City”) which featured the writing of Jose Emilio Pacheco. 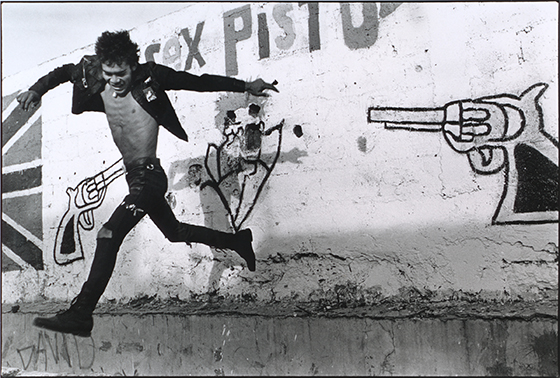 Description: This print by Faith Ringgold originates from the children’s picture book Tar Beach. The book won both the Caldecott Medal and the Coretta Scott King Award for Illustrators. The main character, Cassie Louise Lightfoot describes how she soars across the sky above her city. Hinted by her name Lightfoot, she is seen here flying with ease across the starry night. Her aspirations inspire the audience and grant them their own means of flight. 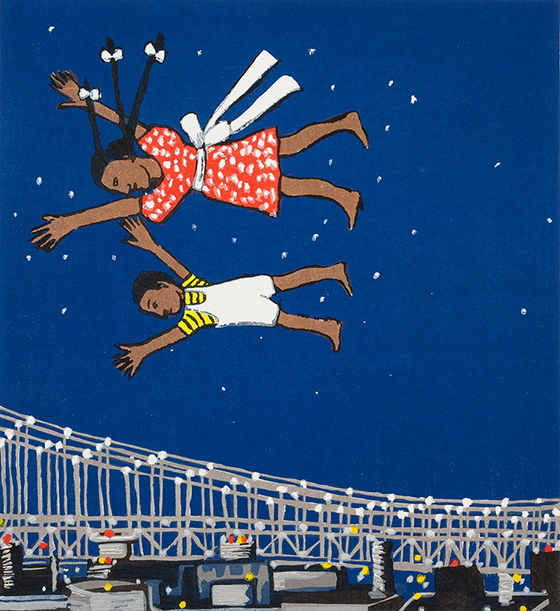 Acquired through the generosity of Jennifer, Gale, and Ira Drukier; 95.034*

Description: Jerome Liebling was a New York City based photographer who’s known for capturing urban areas. This piece in particular focuses on a young boy in front of a car in New York City. The boy’s small size and gaze creates a sense of vulnerability with the viewer, almost like an invitation to come closer. Once the viewer is focused on the boy, it is much easier to notice that one of his shoes is worn down. His gaze, size, and worn shoes are meant to intersect the viewer’s emotion and empathy. 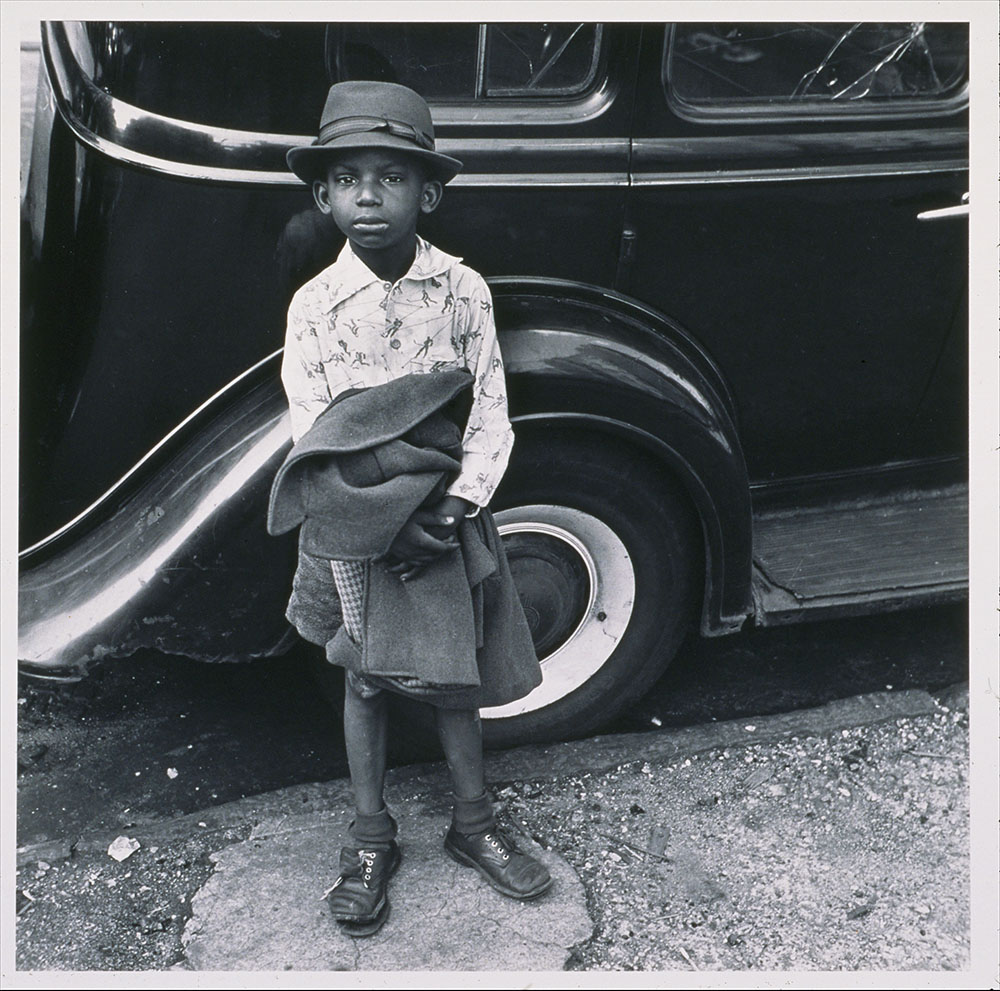 Margaret Bourke-White in plane with pilot

Description: Bourke-White was a groundbreaking female photographer and alumni of Cornell University. Throughout her career she was able to photograph an array of fascinating subjects, including areas of the world that in her time, were mythologic in their secrecy or in their obscurity. Bourke-White was one of the first American female photographers invited internationally to many countries to capture life in still images. This gelatin silver print is of her and a pilot in a cockpit of an airplane, potentially posed before a work-related excursion. 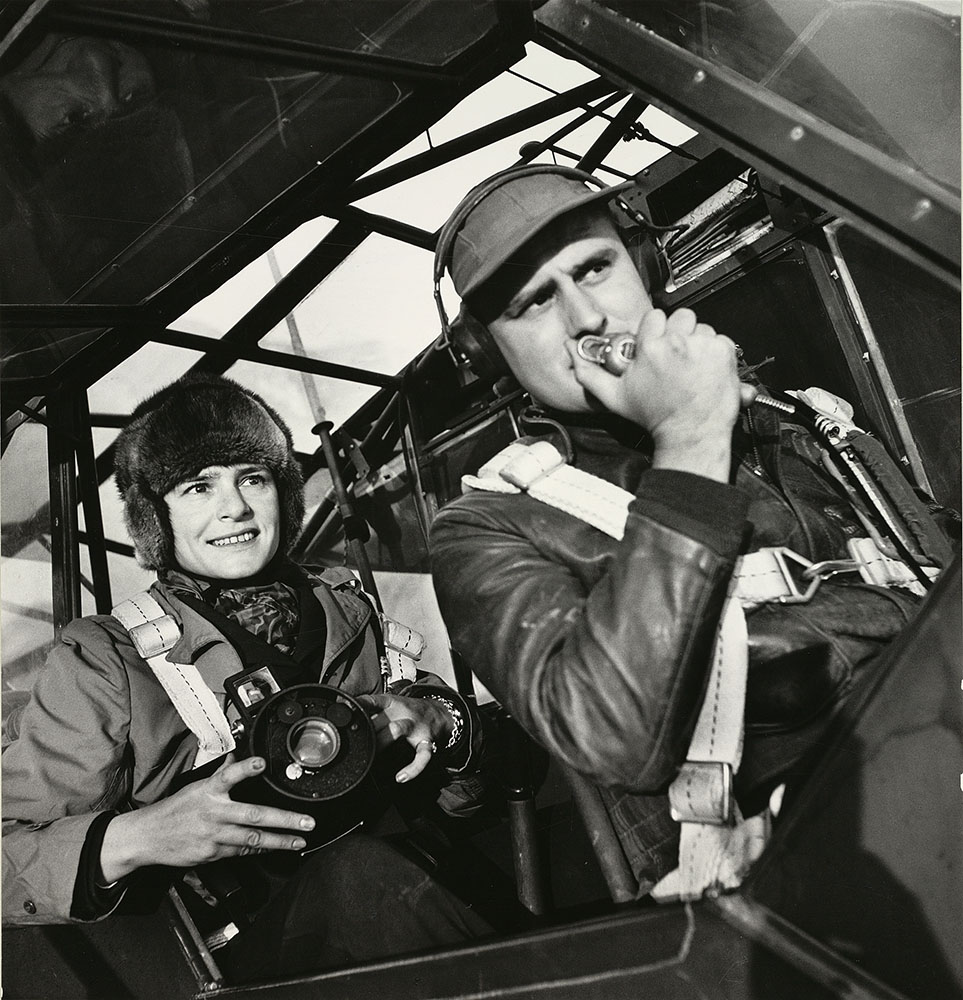 Description: Margaret Bourke-White was a prolific and traveled American photographer and photojournalist in the twentieth century, capturing industrial work, war, socialism, communism, civil injustice, and in many ways life, as she found it interesting or beautiful. After transferring universities many times, she completed a bachelor of arts at Cornell University in 1927 and is famous for taking images of rural Ithaca, New York, and living in Risley Hall. She was one of the first female war correspondents and was uniquely allowed access into the U.S.S.R. to document life under communism. This particular image features the Moscow Ballet School in the early thirties performing a choreography titled Chain Belt Movement: Machine Dance; the dancers grip the crux of the elbows of the dancer in front of them and move together like that of a chain belt on a machine or a bicycle. The effect is a dynamic visual linking, something Bourke-White was intensely fond of: machines and people in the same world. 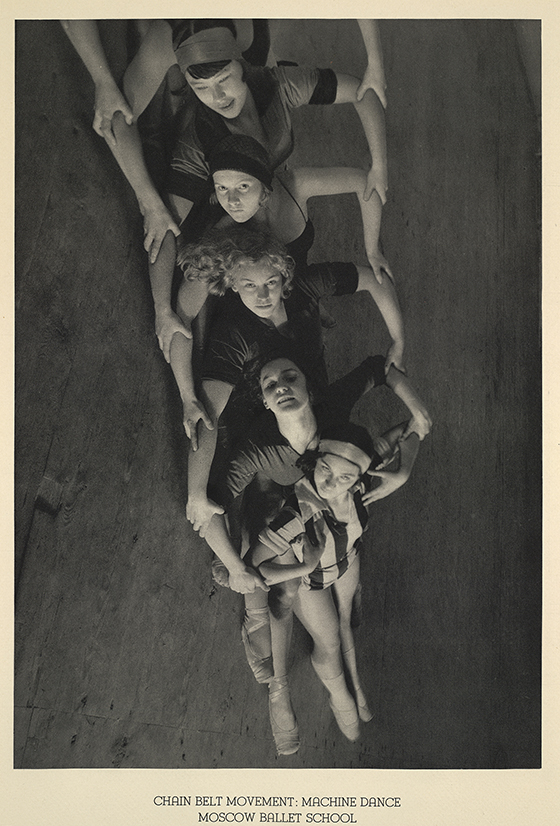 Description: Jinrikisha is a Japanese word that translates to “human-powered vehicle” and later became the more known “rickshaw.” This image was taken towards the later half of the nineteenth-century and features female passengers on cushioned seats pulled by men on large carts with very tall wheels. This form of transportation became possible as ball-bearings were invented and led to a great deal of engineering advancements. 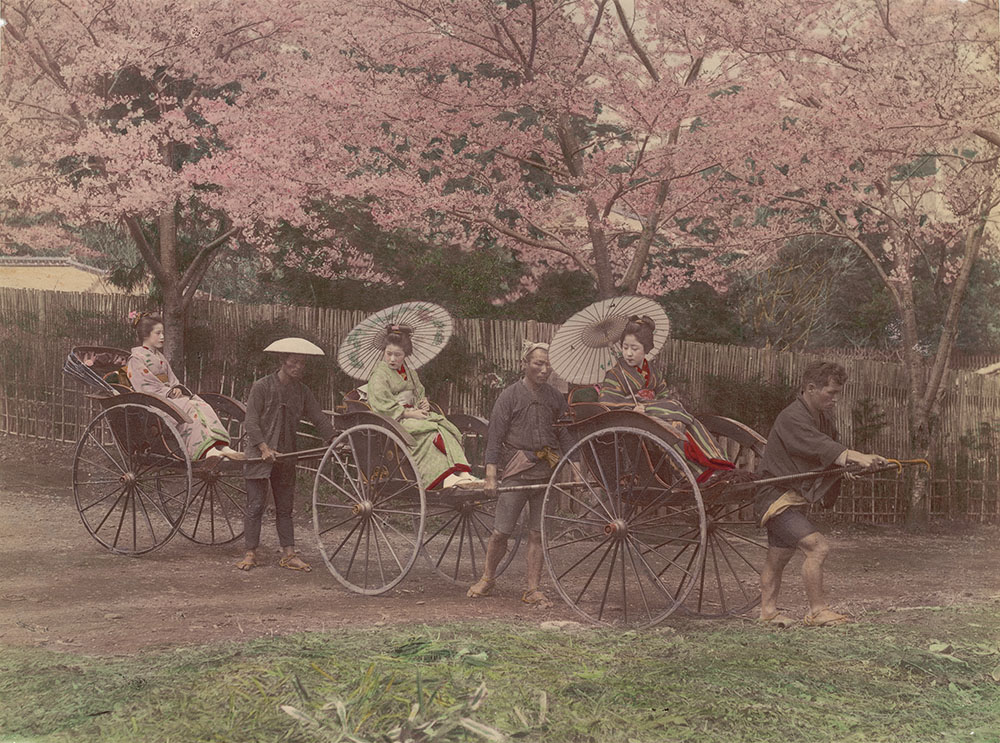 Acquired through the Membership Purchase Fund; 69.005

Description: Paul Klee was a Swiss-born German artist. His style was highly influenced by expressionism, cubism, and surrealism, reflecting his dry humor and sometimes childlike perspective, personal moods, beliefs, and musicality. In “Was Lauft Er?”, etching, on heavy wove paper, 1932, signed in pencil, Klee is bringing up a new suggestion for drawing the human body that doesn’t necessarily require a nude model which can be found hardly. Painters can easily illustrate their transition from self-imagination to a realistic view and vice versa to create consciousness in their artworks. 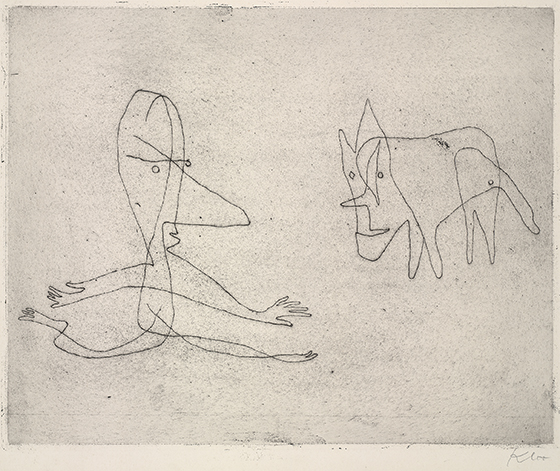